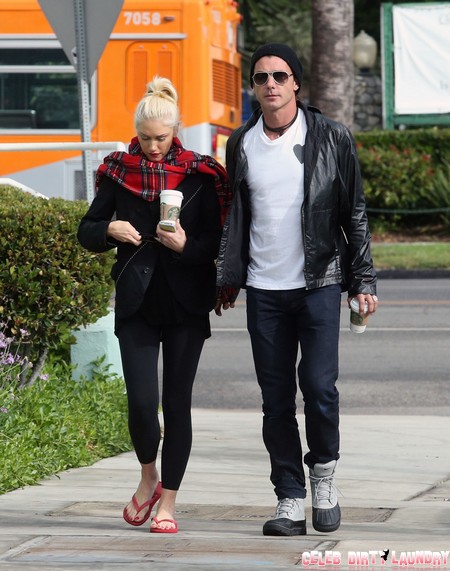 Uh-oh. After a few weeks of rumors and speculation it’s starting to sound like Gwen Stefani and Gavin Rossdale’s marriage really is on shaky ground. Trouble began brewing for the Hollywood super couple when Gavin’s band, Bush went back out on tour. His hectic schedule, mixed with Gwen’s juggling of both her fashion line and reuniting with her No Doubt band mates, has left the couple in a marital crisis. They are rarely in the same place for very long and according to the latest issue of In Touch, it has really affected the couples’ communication.

“Over the past two years they’ve spent less and less time together,” Although the pair have denied they’re splitting, the source reveals, “They used to be affectionate with each other and laugh a lot. That never happens anymore.” The couple’s troubles stem from the Bush front man’s busy tour schedule, which prevents Gavin from spending time with his wife and their sons, Kingston, 6, and Zuma, 4. “There were months where he wouldn’t even be at the house,” says the source.

I can see having a really hard time making the schedules jive but not finding a way to come home to your wife and young sons is a recipe for divorce. The couple was recently spotted leaving a marriage counselors office and they always put together Gwen was clearly crying and disheveled after what was obviously a difficult session.  The fact that they are in therapy doesn’t really mean much to me.

Lots of couples go to get help in dealing with issues together rather than trying to work stuff out separately. But the time apart isn’t about to get any better. Gavin will continue to tour and I suspect at some point the rebooted No Doubt will hit the road too. Then what? Will Gavin and Gwen be able to hold things together or will we be hearing of an amicable separation? Tell us your thoughts in the comments below!