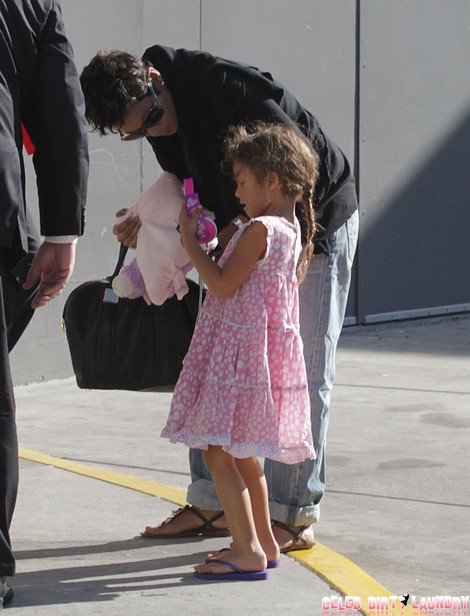 We hope this is true! Yesterday we reported that Gabriel Aubry was granted a restraining order after he was allegedly attacked by Halle Berry’s fiancé Olivier Martinez. Gabriel, a model and father of Halle’s daughter Nahla, was granted a restraining order against Olivier since he was beaten to a pulp by the murderous ex-boxer. Gabe’s been fighting in court to prevent Halle and Olivier from moving Nahla to France permanently, and last week, he reported that Olivier made death threats and violently assaulted him. Since the brawl, team Halle has been maintaining her fiancé’s innocence, claiming it was Gabriel who started the fight.

Halle has claimed a move to France would be safer for her daughter, because of strict paparazzi laws. We were worried that Halle’s maternal values would go out the window as she worked overtime to protect her fiancé, but a new source claims she is desperate to protect Nahla, and will quit acting if it means she can keep out of magazines. Uh—how about not having an egomaniac, testosterone filled fiancé who beats up your ex? Women with healthy relationships aren’t tabloid stars. Just something to consider, Halle!

“Now that a court has ruled Halle can’t move to France permanently, she feels she’s left with no alternative but to quit her career. It may seem pretty dramatic, but Halle doesn’t know what else she can do to stop the tabloids writing about her.” Of course, it isn’t the publications that scare her, it’s the invasive paparazzi that stalk and hound her. The source explained this: “She also thought that would make her less of a target for the paparazzi, but with all the drama going on in her personal life, that hasn’t been the case.”

Halle is an Oscar winning actress who has not stopped working since the birth of her daughter. “It would be hard for her to just quit,” the source consents. No matter what career choices she makes, one thing is certain: Halle is on a rocky path right now, and needs to start refocusing her life around Nahla’s health, safety, and happiness. If that means Olivier gets shipped back to Paris, so be it! What do you think of Halle’s Holiday Fight? Is Olivier innocent, or a violent guy with a short fuse?