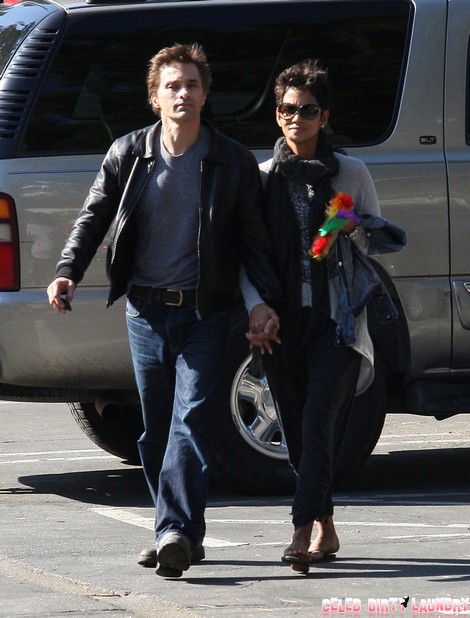 The Halle Berry Thanksgiving brawl has become a growing tumor of subjective accounts and he said/she said mentality. If you haven’t been following the news, Berry’s ex Gabriel Aubry was involved in a heavy altercation with Berry’s current fiancé, Olivier Martinez on Thanksgiving day. After the throw down, Berry and Martinez obtained an emergency protective order from a judge that consequently barred Aubry from coming within 100 yards of Berry, Martinez, and his beloved daughter Nahla. Latest reports indicate that Aubry will be contesting this emergency order in court today (11/27/2012). Aubry has also, since the brawl, obtained a restraining order against Martinez.

During the first few hours after the fight, drops of information spilled onto the internet and media outlets. At first, Aubry was painted as the villain and instigator of the fight. However, after five days, the tables have turned and Martinez and Berry have been described as plotting, manipulative bitches who are out for revenge after their failed court bid to take Nahla permanently to France.

According to Aubry’s declaration, the events of the night are much different from Martinez’s self-defense plea. Allegedly, Aubry arrived at the house to drop off four-year-old Nahla, but the usual nanny go-between was replaced by a fuming Martinez who said to Aubry, “We need to talk.” Aubry then walked back to his car, when Martinez jumped on Aubry from behind and knocked him to the ground. Martinez screamed that Aubry cost them $3 million in the custody battle, referring to the failed bid to take Nahla to France. Whilst Martinez assaulted Aubry, he screamed that they were going to move to Paris and that Aubry had better move their too, otherwise Martinez was going to murder him. Allegedly, Martinez then said, “We called the cops. You’re going to tell them that you’re the one who attacked me, or I am going to kill you.” The previous day, all three attended Nahla’s school play. According to the written declaration from Aubry, Martinez whispered in his ear at the school event, “I wish I could beat the s**t out of you right now. You’re lucky we’re in a school right now. We’re going to take Nahla right now and you’re not going to follow us.”

New, chilling pieces of information were also released, however, that paint Martinez in a much, much darker light than before. Allegedly, Martinez beat Aubry to a pulp in Berry’s motor court, and then proceeded to bash Aubry’s head against the concrete pavement. The image of a beaten, black-eyed Aubry did the rounds on TMZ and other media outlets, and clearly showed the extent of damage Martinez caused. According to police reports, Aubry did not mention any of the threats after his subsequent arrest. Martinez, on the other hand (literally), was spotted earlier this week exiting Cedars Sinai Hospital with a smirk on his face. His busted hand was hidden from the prying eyes of the paparazzi.

The criminal legalities are extremely complicated. Although Aubry was arrested and booked on a misdemeanor investigation charge, the witnesses (Halle Berry) will contest in court that Aubry was the first to throw a punch, which will consequently make Aubry’s allegations of abuse moot. He did not inform the on-scene police of the threats, but only later spoke out about the Martinez threats during his official declaration. Then again, according to the sworn declaration, Aubry did inform the police of the security footage and asked them to secure the videos before they were destroyed. If it were not for the videos depicting the brawl, all evidence would be hearsay.

A latest Radar Online report, released on 11/27/2012 at 7AM, reveals that detectives in an unmarked car did, in fact, visit the home of Berry and Martinez earlier this morning to continue the investigation. The chances are slim that Martinez will face criminal prosecution, as Berry and her beau are masters at manipulation. If the documented footage – which has not yet been handed to the police – does indeed show that Martinez took the first shot, the story would take a dramatic turn and Martinez could be arrested for aggravated assault, or worse, attempted murder.

Several important questions are raised in the wake of the fight. Firstly, what will become of Aubry and the continuous parental battle between him and Berry? New reports have revealed that Aubry might face deportation back to his native Canada after the arrest. He is only on a work visa in the United States, and according to a source at Radar Online, “Anytime someone is arrested in child abuse, domestic violence, assault or battery charges, the Immigration and Naturalization Services is contacted by law enforcement.”  This could have a devastating effect on his career and his bid to win back Nahla.

Secondly, Martinez’s scot-free walk of shame might not last as long as he thinks. Whilst he might not be arrested for the assault, he might still face legal troubles in the form of a civil case. Aubry could allege that Martinez caused him emotional, physical, and psychological distress after the brawl, and he could also allege that Martinez cost him loss of work and loss of income. This civil case might not hold water in a criminal court, but people have sued for far less in previous years.

Lastly, what will become of Berry? Will she appeal the court decision that barred her from taking Nahla permanently to France? There’s also a huge chance that Berry might fight for sole custody with stricter parameters regarding Aubry’s parental visitation rights. According to a legal eagle, “This will most likely not affect Halle’s custody of her child. It will most certainly affect Gabriel’s right to custody. He may not be able to be alone with the child in the future. There’s a good shot of no joint custody. And it’s likely that there will be orders of protection, and Halle and Gabriel may no longer be able to be in the same room.”

In the end, the onus rests on all three to make Nahla top priority in the most disturbing case of assault in recent Hollywood history. The tip of the iceberg is nearing Berry and Martinez’s juggernaut empire, and Aubry will most definitely steer their ship into the icy face of karmic retribution and justice.