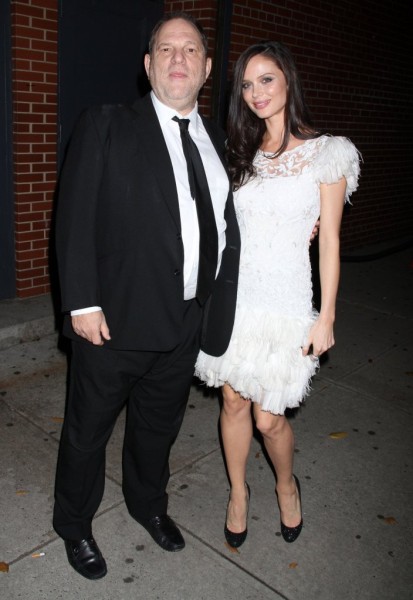 Georgina Chapman allowed Harvey Weinstein to knock her up again. The super movie producer and the Marchesa fashion designer married in 2007 and already have a two-year-old daughter together. Harvey has three other girls from a previous marriage. Do you think they’re hoping for a boy? “We are both over the moon,” Chapman told the New York Post.

Is this a power thing? I get being attracted to hulking, powerful men who aren’t necessarily attractive. I still have a huge thing for Tony Soprano and suspect it will last me a long while. But there are just so many disturbing stories out there about this creepy and uber successful dude. The latest one everyone’s been whispering about is the Gretchen Mol story. Lainey Gossip posted a blind item that a lot of people guessed was about Gretchen Mol, Harvey Weinstein and Georgina Chapman. People believe Harvey is the producer in question who’s in the business of exchanging careers for sexual favors and used Mol pretty bad in the process. She served her purpose for awhile and when he was done with her then he was done with her. There’s also the story that Gretchen tried to end it with Harvey when her career started taking off but he got pissed and pretty much blacklisted her in Hollywood, ultimately stalling everything she started. He’s supposedly on to Blake Lively now but she’s managed to stay away from him. Perhaps she’s happier being Ryan Reynolds’ housewife in New York to Harvey Weinstein’s on the side in Hollywood. Oh, and Georgina is supposed to know about all of this but she just turns her head.

Again, this is all blind gossip and rumor but when disgusting stories like this stick you have to wonder if they’re true after all. But babies cure all in Hollywood so Georgina Chapman’s pregnant! Mazel. Harvey Weinstein must be a hell of a guy!