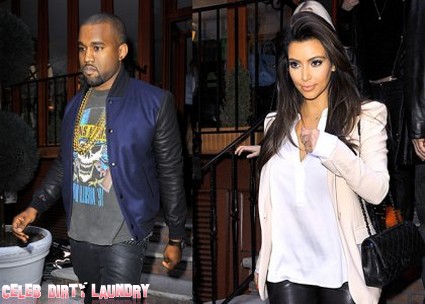 Is there more to the Kanye West – Kim Kardashian hook up than first thought? There’s talk the K-Man has knocked up the K-Woman. Kould the klaims be korrect? Is the unusually loose klothing koncealing a kid?

Kim has made no secret of the fact she’d love to be a Mom. The reality TV star talked about having children constantly when she hooked up with her now ex Kris Humphries. That might not have worked out but her biological clock is ticking louder and louder. Enter old friend Kanye West. The rapper not only has the right initial – a name starting with a K – but he’s rich and famous. They’re must haves if you’re going to knock up the most famous of the Kardashian sisters.

You have to ask yourself – why else would the chart topper agree to star in a reality TV show about an attention seeking, camera loving family in California? His appearance would be mandatory if he was Kim’s baby daddy. Kris Jenner would demand he sign his life away and let a camera follow the parents-to-be every step of the way.

Kim is insanely jealous of sister Kourtney Kardashian. She’s not far away from giving birth to baby number two. Kim needs to catch up quick. She can’t have a sibling landing more magazine covers and column inches. A baby would mean everybody is talking about her. And think of the endorsements – a never ending supply of new products to put her name to! You can hear the Kardashian kash registers going ka-ching already!