Heidi Klum and Seal Get Together For the Kid’s Sake 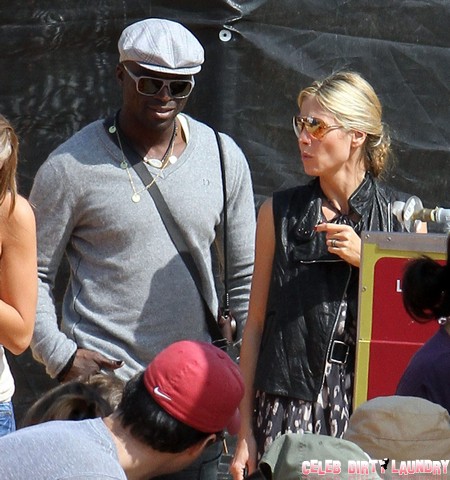 You know the hippy-dippy song by Stephen Stills ‘Love The One Your With?’  Well Heidi Klum is not only familiar with song’s theme line, “If you can’t be with the one you love, love the one you’re with,” but the model has adopted it as her creed.  Heidi now brags on TV to Katie Couric how she slept with bodyguard Martin Kirsten, making me wonder what kind of a nightmare mother she must be.  What does she teach her kids?  ‘Hey little ones, here is the way to conduct yourself: have sex with anyone handy whenever the urge strikes you!’

Well I suppose that Heidi has the legal right to sleep with whomever is willing to sleep with her.  But does she need to talk about it on TV?  I can just imagine her poor kids at school putting up with cruel teasing by their peers.  Of course Heidi proved what a truly amazing mom she can be by reuniting with Seal.

Yes Heidi put aside her differences with estranged husband Seal for a moment or two on September 8th to attend son Henry’s birthday party.  The party for their child was held at Seal’s Brentwood home and apparently was the first and only time since Seal exposed Heidi’s torrid relationship with the bodyguard that they have met.

You really have to marvel at Seal’s male chauvinism.  He has been on a womanizing tear ever since (and allegedly, prior to) his split with Heidi, but all of a sudden he goes ballistic at her for sleeping with the bodyguard?  Grow up Seal – good for the goose, good for the gander, and all that stuff – she is no worse than you.  Of course you are both self-indulgent creeps, but that’s just my opinion.  What do you think?