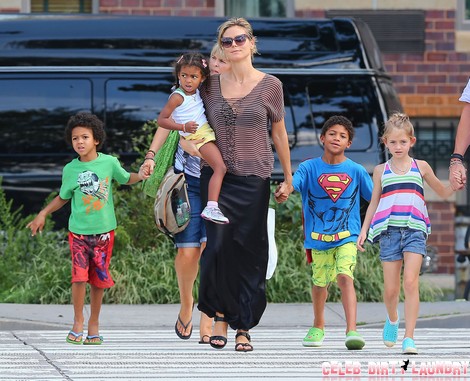 Heidi Klum’s new boyfriend, and her bodyguard, is Martin Kirsten. They have been dating for three months!  The pair was recently spotted in Sardinia, Italy, where they took a holiday with Heidi’s four children (three fathered by Seal, one legally adopted by him). Martin has been Klum’s bodyguard for four years, and I can’t help wondering when their relationship really started.

In Touch Weekly exclusively confirmed the new couple. Heidi once admitted to being a romantic: “I really enjoyed being married,” she said. “I’m a dreamer. I loved our annual fairy-tale weddings that were our big family parties. But sadly, it somehow didn’t work out. I don’t know if I’ll get married again.”

Perhaps she finds this simmering romance, oppressed by a very public marriage, to be the real ending to her fairy tale? No word yet on when the pair decided to give their love a chance, but her divorce with Seal isn’t even finalized yet! That can’t look good to a judge . . . especially since Kirsten probably had full access to the family . . . and to Klum!

Klum split from husband Seal in January, and then filed for divorce in April. The pair promised to keep the proceedings clean for the sake of their four kids, but Heidi’s new relationship could easily motivate Seal to get nasty and draw it out!  But after all, Seal has been womanizing like Charlie Sheen on crack so what can he really say?

Well, only time will tell whether this relationship will be the one. Heidi, 39, has been married twice. Could the third marriage be the charm in her fairy tale?