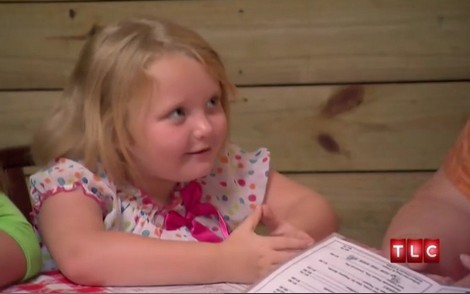 Tonight an all new episode of Here Comes Honey Boo Boo airs on TLC.  On tonight’s episode is called “Shh! It’s A Wig” the family celebrate July 4th with a picnic and fireworks and Sugar Bear brings home a pool that requires some assembly.

If you have never watched “Here Comes Honey Boo Boo” we first met Alana Thompson AKA Honey Boo Boo on Toddlers & Tiaras.  The show is an inside look into Alana’s world where the six-year-old pageant sensation proves that she is more than a beauty queen. When she’s not chasing after crowns, Alana’s with her family in rural Georgia doing what her family does best: four-wheeling through mud pits and picking up road kill for the family cookout.

On tonight’s show it’s Fourth of July week and the family enjoys a picnic and fireworks. Sugar Bear surprises everyone with a new pool, but putting it together is a challenge in the heat. June searches for a new hairpiece that could help Alana win at the big pageant.

The family heads to a restaurant house  to have Bar-B-Q because Sugar Bear wants everyone to have a sit down meal.   So they head to a Barbeque house and there are pigs everywhere.  Honey Boo Boo decides she wants the Barbeque, the chicken and the ribs.  She then pipes up that her family loves to eat.  Then she says, “Were Fat!” and Sugar Bear tells her, “Were not fat we’re pleasingly plump!”

Tonight’s episode looks like it is going to be another crazy Thompson family episode and you won’t want to miss it, so be sure to tune in for our live coverage of  TLC’s “Here Comes Honey Boo Boo” at 10:00 PM EST! While you wait for our recap hit the comments and let us know what you think of the premiere season of Here Comes Honey Boo Boo, so far!

Tonight’s episode: Alana “Honey Boo Boo” just finished a big pageant and she is going to a store, “Shh It’s A Wig”, with her mama to get a new wig for the next competition. Alana thinks the right wig can help her win the next pageant. The first one looks like “grandma hair”, or as Mama says, “a hot mess”. Alana has her eye on a sparkly one, then a Nicki Minaj type wig. June tries a wig on and Mike “Sugar Bear” starts getting frisky. Mike then tries on a mullet and also looks like one hot mess. June doesn’t think the store has anything for Alana, she feels they look more like Halloween wigs than pageant wigs.

Mike admits his “puttin’ together” skills aren’t that good. June is in the shade, while the girls and dad try to put the pool together. Everyone is overheated and the pool is only half made.

The pool is finally put together, Mike gives it two months before the girls destroy it.  Two hours later, the pump is already leaking after Alana takes a few good dives and shows us her best fish lips.

Later that day, the family heads to Paradise BBQ for a sit down dinner. Alana orders BBQ, chicken, ribs, potato salad and baked beans. Mama knows Alana is not going to eat all that, but she won’t listen. The girls start to talk at dinner and say they wish Mama would marry Mike, but she tells them no way, not even if she got struck by lightening. June claims that she only has time for her girls, they are her number one priority. The family is still at dinner and the girls have no problem farting right at the table, gross.

The family head to Tony’s farm for a fish fry, which is literally just that, they take the whole fish and dumb it in oil. The family then drive over to the local department story of Wilkinson county, which is the dumpster. Mike starts going through the trash and everyone is excited. Alana thinks they should have a “dumpster pageant”, cause she would win. The family is done at the department store and head back out in their three wheelers.

Fourth of July is a big holiday in the south, so the family head to the beach.  June has a towel on her head to keep her cool, she calls it a “redneck air conditioner”. Alana wants see what it’s like to be a lifeguard, so her mama takes her over to the lifeguard chair and the lifeguard lets her up on the chair, she also gives her the whistle and after she blows it about twenty times, the lifeguard looks happy that Alana heads to the beach to swim and gives up her idea of being a lifeguard. Mike didn’t put his swim trunks on, he claims if he shows off his legs all the women are going to chase after him, is he serious?.

It’s time for fireworks, Alana thinks they are awesome and calls it the best day of her life, she tells her mama that “it’s raining colors”.

Back at home, Jessica and Lauryn sing the “Star Spangled Banner” and it’s so bad that Anna looks like she is literally going to vomit.