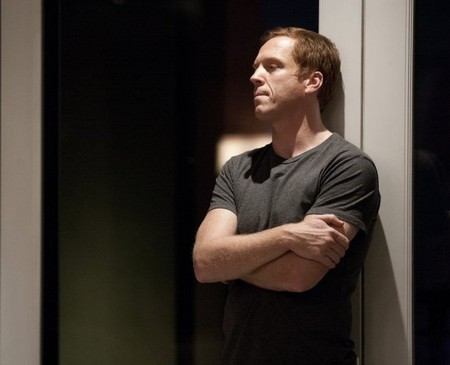 Last night saw Carrie disobeying orders (as per usual) and heading back into the warehouse to try to take down Nazir herself. The last we saw, she was plunging into a dark room with a lead pipe – sounds like a twisted version of Clue. It was Carrie with the lead pipe, killing Nazir in the office… Except that’s not the cards she drew.

We next see Carrie stumble out of the warehouse into the glare of spotlights and a bevy of police, SWAT and CIA special agents. She has to tell them she lost Nazir. But here’s the big question – will Carrie tell on Brody? If not now, will she blab once she finds out the plan worked and Walden is dead?

Carrie will be in the Brody or her country conundrum and we’ll finally know if she’s running him or he’s running her. My money is on her not selling Brody out. Walden was a dick even though he was the VP. I’m assuming he’s dead and the EMTs Brody called after the collapse won’t be able to revive the Veep. If they do, Brody’s deathbed confession (though not his deathbed) to Walden could prove his undoing.

Carrie tells Quinn that for Nazir to get away, he must have been helped. She tells him there’s a leak in the CIA back to Nazir. I agree. How in the hell did he know where to find the serial number and access code for Walden’s pacemaker? That’s a pretty inside source to give him information that personal and specific – information he used to kill the second most powerful man in America from a remote computer.

Quinn wants to know if Carrrie’s telling him about the leak because she trusts him. Meanwhile Saul is being held at the CIA in interrogation. Do they think he’s the leak? It may be Galvez. Remember that he showed back up at the ops center when he was supposed to be in the hospital still. And it was right when Carrie went missing. Did he show back up conveniently in time to feed Nazir info on Homeland’s movements? Or is he a red herring and it’s someone higher up?

Next Sunday’s episode will answer or further torment us with these questions: With Walden gone is Estes’ job at the CIA safe? Is Saul going to make it out of interrogation with body, soul and job intact? Will anyone realize Brody had something to do with Walden’s death? They’ll know he was there, but will they see him as implicated? If Carrie doesn’t tell the CIA what Nazir really wanted, what will she tell them was his motivation for taking her? How will she explain that he didn’t kill her? He’s not a terribly merciful person, so it’ll be hard to explain how she got away unless he got what he wanted. Will the CIA figure out that Carrie was kidnapped as a tool to motivate Brody?

Tune in to Showtime at 10 pm this Sunday for Season 2, Episode 11 “The Motherfucker with a Turban” and also come to Celeb Dirty Laundry for a live recap and commentary as the show rolls out. See you then!