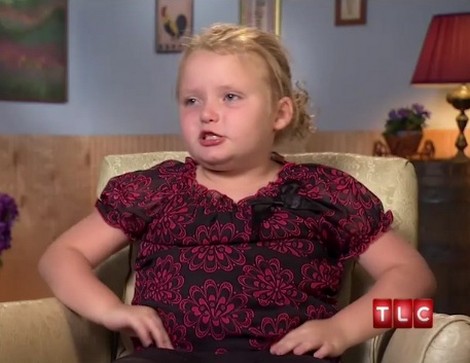 I wasn’t going to do it. It didn’t seem like a productive use of my time. It seemed like it may scar me for life. The draw was too strong, though. It sucked me in the same way Twilight did. It sucked me in the same way Jersey Shore did. So much negative press. So much hate from my friends. I had to see what all the fuss was about so I did it. I took the plunge. That’s right. I watched Here Comes Honey Boo Boo.

A friend had the first six episodes on the DVR and asked if I would like to watch them. I had a reaction similar to when the same friend asked me if I wanted to watch one of those Faces of Death videos from the 80s. I was shocked and a little horrified. How could such a close dear friend be in possession of such filth? I was also more than a little curious. I didn’t give in on Faces of Death but I was quite certain nothing, other than what’s left of my faith in the human race, would be harmed by watching the antics of Honey Boo Boo Child and her family so I decided it was worth a look.

Here’s the truth; I admittedly have a soft spot for trashy reality television. I watched the first four seasons of Jersey Shore faithfully but gave up on it about the time The Situation knocked himself out with a wall. The fighting! The yelling! The mind-numbingly stupidity of just about everyone in that house! It was all too much and I realized that the headache I got from watching the show was not worth the guilty pleasure I took in realizing that no matter what happens, I could always comfort myself by saying, “At least I’m not on Jersey Shore.” You’d think I would’ve known better than to dive into another show I’ve heard referred to as Jersey Shore with rednecks. I’m glad I gave it a shot because Here Comes Honey Boo Boo is not at all what it appears.

It’s easy to hate Here Comes Honey Boo Boo based on the commercials or the things you’ve read about it on the internet. I began watching fully expecting to be outraged. I wasn’t. The show isn’t nearly as bad some would have you believe. My biggest problem with the show is the angle the producers seem to be focusing on. “These people are weird. They don’t do things the way most of us do so they’re strange. Let’s all point and laugh.” The problem with that thinking is, really, they’re not all that strange. If you’ve ever been to redneck country (where I live and grew up, for the record), it’s not all that unusual for little girls to enjoy playing in the mud. It’s not all that unusual for girls to think passing gas is hilarious. I was never like the kids on this show and I was the weird one growing up. The real question is whether or not these kids are being exploited or even harmed by the show or the life that they’re living. The answer, if you’ve watched the show, anyway, should be a resounding no.

When I watch Here Comes Honey Boo Boo, I feel like I’m watching a happy family. Despite their struggles and their problems, they care for each other and support each other. Jersey Shore with rednecks, this isn’t. The kids on Jersey Shore are pretty terrible people for the most part. That can’t be said for the family on Honey Boo Boo. They might be a little misguided at times and they live a life some of us may not understand – the road kill eating especially disturbs me – but they genuinely seem like good people.

After watching the show, it’s pretty obvious Alana’s childhood isn’t being stolen from her. Aside from enjoying the mud more than I did, she’s not much different than I was at her age. She does spend a lot of time preparing for beauty pageants but is that really all that different from young girls who spend their time learning ballet or gymnastics? I’ve never once heard anyone tell Alana she isn’t pretty enough to win at pageants. Instead, she’s been told to work on her eye contact and her personality. Is that really a bad thing? From where I sit, developing those skills is important and could help her later in life. The competition aspect is tough, for sure, and it’s incredibly sad to see Alana so upset when she doesn’t win, but how is that different from a child getting upset because they didn’t win at a gymnastics competition, a swim meet or a talent show?

The sexualized nature of beauty pageants is definitely troubling. I don’t think anyone can, or would even try, to deny that but I don’t think that necessarily means all beauty pageant contestants are bound for disaster. The problem comes in when parents are dressing their kids like prostitutes (literally) and things of that nature and asking them to do provocative things on stage to try to win the favor of the judges. That sort of thing gives beauty pageants a bad name but let’s keep things in perspective. Not all beauty pageants are the same and not all pageant parents are trying to force that kind of behavior on their children.

“But what of young Alana’s reaction to losing? How can her Mama Boo Boo, June Thompson, put her through that? It’s outrageous! She’s destroying her child!” All great points if they were even remotely true. Alana takes losing hard, yes, but so do most children who lose at anything. Having hurt feelings is a normal and necessary part of childhood. It sucks, but it’s the truth. Having hurt feelings as a child helps you prepare for having hurt feelings as an adult. If you enter your child into anything competitive, you are risking letting them have their feelings hurt but it’s still important to let them compete. Competition is a part of life and as a parent, you need to help your child understand that winning isn’t everything. Does Mama get that across to Alana? Not all the time, no, but she does try and that’s more than can be said for some parents.