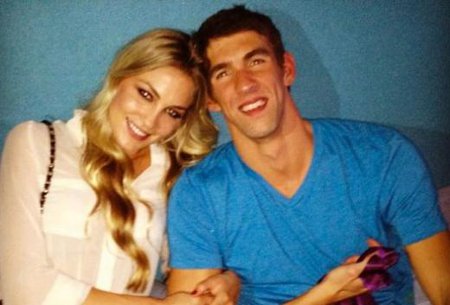 Michael Phelps has finished his gold-winning Olympic career in the pool, now it’s time for people like us to dive into the pools of his romantic life: Is Michael Phelps dating model Megan Rossee? While the Olympic swimmer hasn’t confirmed or denied anything as of yet, Phelps was seen celebrating with a mysterious blonde not long after his record-setting stint at the 2012 London Olympic games.

According to Hollyscoop, the mysterious blonde beauty is Megan Rossee, a 25-year-old model from the L.A. area. “She and Phelps began dating in January (of this year) and things started to heat up just prior to the Olympics in London,” says the source.

“Michael knew that he had to leave for the Olympics and not wanting to give up on their relationship, he flew Megan out to the trials in Omaha, then to London for The Games. They’ll remain in London for three weeks after the Olympics wrap up this weekend to check out the sights and do some traveling together.”

While this source seems legitimate and they seem super snuggly and comfortable together in that photo, Phelps has been linked to nearly every girl under the sun . . . so we’ll believe this nameless source once Phelps comes out and tells us himself. If the source is accurate, then Michael is getting pretty serious with her, so serious in fact that he’s eager for her to quit her job as a cocktail waitress so they can travel the world together. Aw, how romantic. It’s up to you now, folks. Is Micheal Phelps’s girlfriend model Megan Rossee?