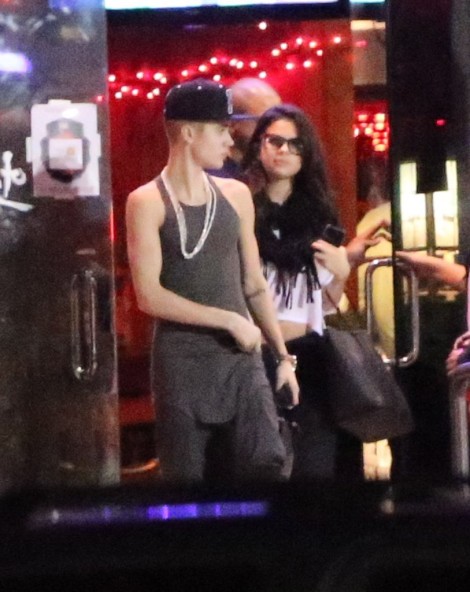 Justin Bieber and Selena Gomez are continuing their reconciliation parade but could there still be some underlying friction? After attending his Wednesday night concert at Madison Square Garden, Selena Gomez met up with Bieber for some post-party games (no, not those post-party games). Honest enough, right? What’s weird about the whole thing is that Justin Bieber’s family scheduled this huge family dinner at Philippe which Justin and Selena ditched. Is Selena trying to separate herself from the family as she figures out a way to cut the kid loose or did the 20-year-old just really, really want to play video games at Dave & Busters?

According to Page Six: “…the two didn’t show up for a dinner organized by Bieber’s family at Philippe on the Upper East Side, but instead chose to indulge in arcade games at Dave & Busters in Times Square. A source told us guests at the Philippe dinner included Bieber’s grandparents, his sister and about 30 friends. But he and Gomez were said to indulge in PG-rated fun and “played a bunch of games,” including a car-racing as well as a shooting competition, and even took a spin on Dave & Busters’ indoor roller coaster. Sources tell us the couple later took off for the Trump SoHo Hotel, where both were said to be staying.”

Am I reading too much into this? Maybe it wasn’t even Selena’s decision to split from the fam. Maybe Bieber didn’t want to sit and chat with his grandparents and cousins so soon after a performance. I get it. If the young couple is so intent on working on their problems then Justin probably just wants to spend all his time with Selena. But… Selena used to be super tight with that clan – like she used to take his little siblings to her premieres and stuff so this could be an indication she’s not totally all about being Bieber’s girlfriend again. Have you ever ran into a boyfriend’s family after you broke up? HORRIBLE. So awkward! So I can see why Selena would want to keep her distance until her mind is made up. However, this was the second night in a row the two hung out in NYC. If Selena’s thinking of ending it again, she’s doing the kid no favor by leading him off with cuddle dates and car racing. I’ve got no love for Bieber but even I feel sorry for his little heart.

Was Selena Gomez avoiding the family or do you think she just wanted alone time with her man?