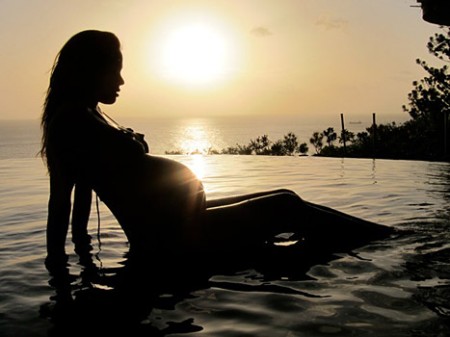 Vanessa Minnillo Lachey’s showing off her sexy baby bump on a romantic babymoon with husband Nick Lachey but is she trying to send Jessica Simpson a message along the lines of, “Look at how it’s done, sweetheart”?

Some of you might think I’m trying to stir up trouble (maybe I am, a little), but the first thing I thought of when I saw the photo of Vanessa’s adorable bump in the sun was Jessica’s red muumuu wobbling down the sidewalk. Admit it! You thought of it too! How could you not? Jessica has become the poster child for the lazy, unhealthy, buttered pop-tart-eating pregnant woman! I understand I’m going to have to think of Vanessa without bringing up Jessica one of these days, but today is not that day! Get over it.

I know Jessica’s declared a detente with Nick and even has delusions that their kids will play together, but Vanessa is very aware that Jessica dumped her husband. Nick didn’t want to leave Jessica, so even though I have no doubt here’s completely with Vanessa 100 percent, there’s always that thought. Come on ladies, I know we pretend we’re not catty at times, but release your inner Real Housewife of Orange County and throw some mud with me. Did you think Vanessa was going to allow herself to grow to Jessica Simpson-like proportions during her pregnancy? No way! Practically every picture I see of her is either going to or coming from the gym. Now, Vanessa takes her health and figure seriously. She’s a host on a reality show, her looks are the majority of her talent, but I have to imagine she’s staying healthy and toned to thumb her nose at the previous Mrs. Lachey as well.

I’m not hating. I would too. But is the photo too much? It’s hidden under the guise of being helpful to other mothers who haven’t fallen in love with the havoc pregnancy plays on their bodies. Vanessa is trying to open the conversation with her “Maternity Monday” tweets. She wrote, “Let’s embrace our changing bodies!… Let’s get creative.” After receiving photos of her fans’ bellies she responded with her Mario Testino-looking shot and said, “Thanks for sharing all your beautiful baby bumps and embracing your bodies! As promised, here’s one Nick Lachey took.” It’s the photo equivalent of telling friends to dress business casual and showing up in a hot black dress. Too much try!

But Vanessa doesn’t have Jessica’s billions from shoe and clothing businesses. Like the current trend of C-list celebrities, she is marketing her lifestyle. Gwyneth Paltrow is the only A-list exception. Fine. I accept that, but….

Do you buy it? Is that all this is? Am I just creating competition in my head or is there just the tiniest hint of gloating in Vanessa’s baby bump?