It’s A Break, Not A Break Up: Taylor Swift Still Together With Conor Kennedy 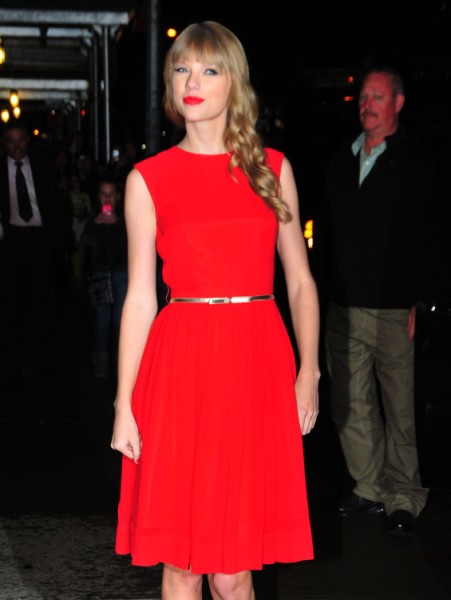 Get out of there kid! Run! Don’t let her call this just a break!

Poor Conor Kennedy. I don’t think he’s seen the last of Taylor Swift. Just a day after the news ran that the couple have called it quits and have been silently broken up for the past month, there is startling evidence to suggest that Conor and Taylor are just cooling their jets to settle the media as well as Conor’s school.

According to Page Six, Conor’s family doesn’t think the summer romance is over yet. Apparently Conor’s school wasn’t too happy about Taylor signing him out for booty calls. “Conor has gone back to school, and the deans at Deerfield Academy in Massachusetts are not happy about him jetting around with Taylor. He was due to attend an awards ceremony with her at the end of the summer, but the school chiefs put the kibosh on it. He can’t just leave school to be with her at every point.”

So that’s a quick way to fizzle out a relationship. Taylor’s been busy promoting her new album so she hasn’t had time to clam bake it with Conor on the east coast. But just give her time. You know Taylor’s counting the minutes and seconds until she can be back in her Kennedy prince’s arms. It actually might not be that long. Female First reports that the Kennedy family will actually honor Taylor at the Robert F. Kennedy Center for Justice and Human Rights’ Ripple of Hope Awards Dinner in NYC on December 3. This is odd, right? I thought they all hated her. Are they only honoring her now because they think she’s gone for good? Oh you shrewd, shrewd Kennedys! They’re obviously underestimating Taylor. She’s not your typical Kennedy girlfriend. This isn’t Marilyn Monroe. She won’t be used and abused and she certainly won’t keep her mouth shut. You can stuff her with honors all you like. She wants the Kennedy name! And I doubt she’ll give up on it that easily. What’s a few months when TRUE LOVE is on the line? Again, poor Conor. He has no idea what he’s gotten himself into and if he thinks he can hide behind a 200-year-old stronghold of upper-class education then he’s got another thing coming. This was no break up. Taylor Swift is just trying to get the media off the scent. Trust.

In other news, have you watched the HBO doc Ethel? It’s about Conor’s grandmother Ethel Kennedy who married Robert Francis Kennedy (JFK’s brother for all you non-history lovers). It’s beyond fascinating. Not enough is done on RFK and I cried liked ten times. I’m a sap for real brotherly love. Some of the clips they showed of Robert dealing with his brother’s death are incredible. And of course there were plenty of sailing scenes. Those Kennedys love their sailboats though I’m sure they refer to them cooly as clippers or ketches. But I dare you to watch that doc and not go stalker crazy like Taylor. You see the over-sized Irish sweaters and Hyannis Port houses and hear all the broad As and you just want to be a part of the club – SO BADLY! I get it. I don’t condone stalkers or 21-year-olds acting like love sick puppies but I get it in this case. I get it.