Jackson Family Breaking Down Under The Stress And Scrutiny 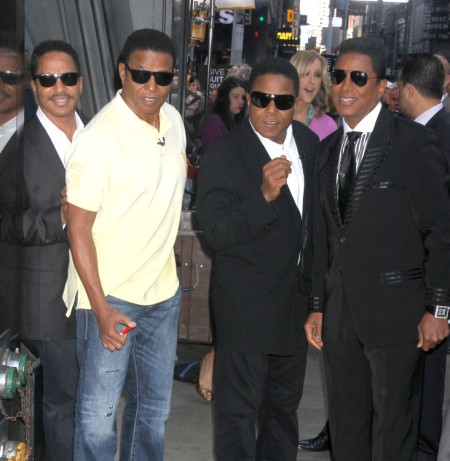 Members of the Jackson family are dropping like flies today and old alliances are breaking as the world watches entertainment’s first family implode in dramatic fashion.

OK, the last time we talked Michael Jackson’s children: Paris, Blanket and Prince Michael Jackson were hashing out the paperwork to make the executors of their father’s estate their legal guardians while Katherine Jackson is MIA. She’s still MIA in Arizona at her daughter’s house, by the way. The elder Jacksons (Jermaine, Janet, Tito, Randy and Rebbie Jackson) have been trying to convince their mother that Michael’s will is a fake and executors, John Branca and John McClain, should resign. Katherine couldn’t take the stress (maybe had a stroke over it) and is relaxing in Arizona per her doctor’s orders.

NOW TMZ has more info about the attempted abduction that went down yesterday and it’s good. Randy, Jermaine and Janet went to the kids’ Calabasas home and attempted to physically remove them to take them to visit Katherine in Arizona. I’ve already mentioned that this was probably going to be used as a publicity stunt to shut the media up and stop Paris’s revealing tweets. TMZ writes:

“Our sources say at one point Janet tried to grab a resistant Paris’ cell phone, a scuffle ensued and Janet slapped the teenager, screaming, “You’re a spoiled little bitch!”  We’re told Paris fired back with her own slap and told Janet, “This is our house. Not the Jackson family house. Get the f**k out!”

At the same time, we’re told Trent Jackson, who was at the house, tried to stop an aggressive Randy and Jermaine.  We’re told Trent put Randy in a headlock and punched Jermaine in the mouth.”

Oh, you can take the family out of  Indiana but you can’t take the Indiana out of the family (I can say that because I’m from Gary, Indiana!). BTW – Paris Jackson is my new hero!

OK, moving on. Since the Paris/Janet smack down, and media embarrassment that ensued, some of the Jacksons are starting to think that their plan to remove the executors has gotten a little of out control.

Jackie Jackson is having second thoughts and Tito pulled out entirely from trying to turn Katherine against Michael’s estate. He told TMZ, “I completely retract my signature from the July 17th letter sent to the Executors of my brother Michael’s estate and repudiate all the claims made against them. I don’t want any part of that letter whatsoever.” The letter in question is the one that leaked on the internet and it claims John Branca and John McClain had “taken advantage of the family … and have stressed out Katherine Jackson so much, that she recently suffered a “mini-stroke.’”

Marlon Jackson’s cracking under the pressure as well. Tito, Jackie and Marlon sat down for an interview with The Insider today and Marlon completely broke down. According to TMZ he said, “We’ve been told that our mother is safe. She’s doing well. But we have not spoken to her. We have not talked to her and I don’t know where my mother is.” and “All i know is she is in Arizona, and whatever doctor is saying I can’t talk to my mother you call ME!”

Then he stormed off. I’m telling you people, you can’t make this sh-t up!

Naturally with his brothers breaking, Randy tried to do damage control. Randy spoke with Al Sharpton on MSNBC’s Politics Nation (I have no idea why that show, but fine) and tried to explain all their crazy ass behavior. He said the main point behind his accusation against the executors is that he can prove Michael was in NYC when the executors said he was in LA signing the documents. However TMZ says there are witnesses who saw Michael sign the will and it has been validated by the court so I have no idea what game Randy’s playing.

OK, are you dizzy? Let’s try to simple this down. Michael Jackson’s brothers and sisters (except Janet) have a sh-t load of kids and ex-wives and no jobs. They need money. Michael had lots of money but only left it to his mom and his three kids. Katherine Jackson’s old. Michael’s siblings think their time is running out to get Katherine to drop the executors so the family can have more control over Michael’s money.

Am I wrong? Let me know what you think! Can the Jacksons ever recover from this? I have a feeling Paris thinks no. I don’t think she’s going to be hanging with her uncles and aunts for a long time to come. Are you following her on twitter yet. I’ll tell you, she’s bad ass!