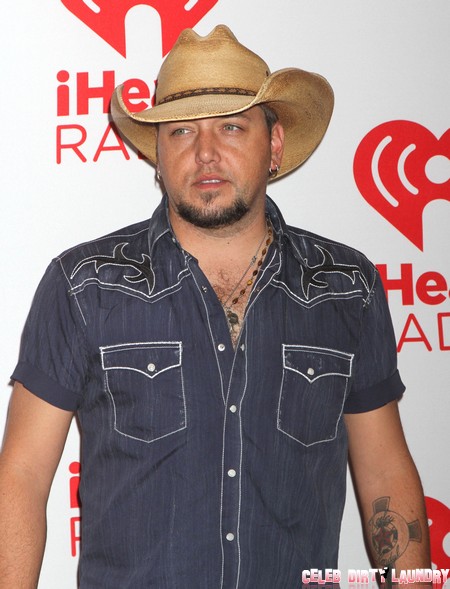 I have to wonder if this entire situation boils down to marrying a high school sweetheart instead of exploring the world. Jason Aldean made news last week when photos showed him drunk in a bar, making out with American Idol loser Brittany Kerr. No big deal—except that Jason is married. With two kids. And his happy family was the cover story for People Magazine. The country star got a lot of hate from his fans, most of whom seem to think living in Tennessee means you cannot participate in any and all immoral activity. Three days after the photos were taken, Jason released an apology statement, taking responsibility for the pain he caused, and asking for privacy. Well the period of privacy has ended and Jason is spilling all to CMT Insider. The full episode airs October 13th and 14th at 11am ET/PT.

So how does Jason explain his public responses to the affair? “You can go hide and run form it, or you can get up and face it and deal with it. The truth is that I screwed up. I had too much to drink, let the party get out of hand and acted inappropriately at a bar.” Of course, the best response would have been to come out and apologize the same day news broke, instead of hiding in a cave for a few days. But it sounds like his apology has worked—even on his wife!

We thought the scandal would be enough to break their marriage, but apparently it takes a little more drama for a true country star to admit defeat! Jason went on, “The main thing is that me and my family are OK, and everything’s good there. So I think it’s been a tough deal. But I kind of said what I needed to say to them an, hopefully, they understand that. And the rest of it will be us dealing with it in private and trying to fix it.”

What does it say about wife Jessica Ussary, whom he married 11 years ago? He has two daughter, Keeley, 9, and Kendyl, 5. The statement above makes it sound like he’s sat everyone down and apologized—but how do you tell a five-year-old something like that? I hope that, whatever is going on in their marriage, Jessica stays strong and is a good role model for the girls. No one should have to put up with a snake like Jason! One drunk night and he is willing to throw it all away—how long before it happens again? I really can’t decide if Jessica just lacks support to divorce him, or if it was a publicity stunt. Jason’s new album comes out next week, so I guess we’ll find out if sales are improved!