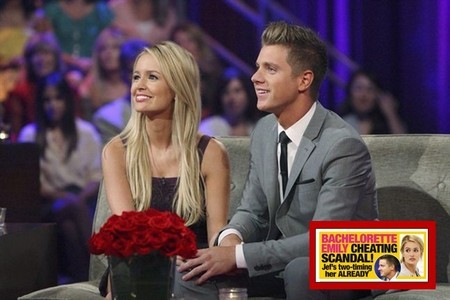 The Bachelorette Emily Maynard is now engaged to the show’s winner and her fiance, Jef Holm but there is trouble in paradise already! Emily was hoping she had found the man of her dreams at last in Jef. A loving husband, doting father to Ricki, reliable and romantic all the way… but such does not seem to be the case.

As The National Enquirer cover of this week’s edition reveals, Jef Holm is a smooth-talking snake who is hiding a nasty secret from his fiancee. Looks as if Jef was involved in a hot sexy affair with a stunning beauty who lives in a country outside the USA.

The problem is that good old Jef promised to import his babe to America while in the midst of his passion.  But NE tells us that Jef seems to have forgotten to tell Emily about her rival…  Of course what did Emily think?  Did she delude herself into thinking Jef was a virgin – that he’d never been with other women?

Emily thought that Arie Luyendyk Jr. was too much of a ladies man – perhaps she made a big mistake?  As we predicted on Celeb Dirty Laundry, while Emily did accept Jef’s proposal, she will not wind up marrying him.

The National Enquirer claims to have learned the following:

The smooth-talking businessman is hiding a dirty little secret from the 24-year-old single mom – and it’s sure to come between them and the altar. The secret stems back to January, before Jef met Emily. The 27-year-old hunk got into a torrid romance with an exotic beauty in a foreign land, and sources say he promised to bring her to the U.S.

Meanwhile, tragedy-bitten Emily lost her first love, racecar driver Ricky Hendrick – the father of her precious daughter — when he died in a plane crash.

AND her trust in men was later shattered when she was chosen and dumped by “Bachelor” Brad Womack, says a source, who adds that Emily “never thought she’d be able to trust men again – until she met Jef.”

Now, the mystery woman threatens to break that trust AND torpedo their fairy-tale romance.

The Enquirer also promises to explain why John Travolta has turned on his brother-in-arms, Tom Cruise.  Could it relate to Tom’s messy public divorce which has subjected The Church of Scientology to a deluge of disparaging media scrutiny?  Perhaps it has to do with Tom refusing to participate with John in any of his friendly little get-togethers with the boys for which he is so well known?  In any case, we’ll need to read the print edition to get our answers.