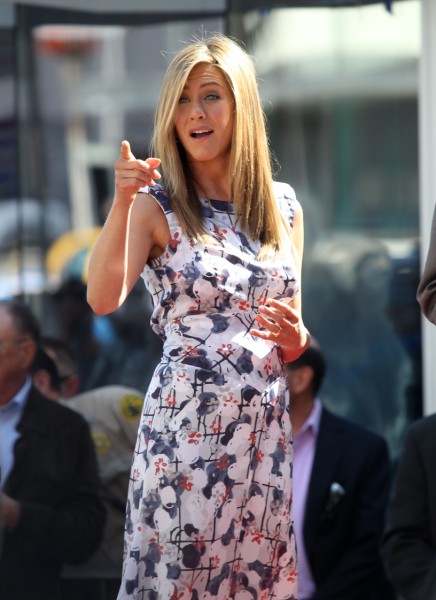 Now that Jennifer Aniston’s love life appears to be on the up and up she’s taking time to play cupid to her friends. Actually, she’s playing the anti-cupid but just as good friends don’t let friends drive drunk, good friends also don’t let their girlfriends date Mel Gibson.

Jennifer Aniston’s body double, Ashley Cusato, has been kicking it with Mel for over a month and not listening to Jen’s advice on staying away from the temper-tantrum throwing, anti-semetic, Jodie Foster defending, shell of a man. I don’t understand what the problem is. When a dude’s most famous line in recent years (“Shut the fuck up. You should just fucking smile and blow me”) is not from a movie  then dating should never even enter your mind.

But Cusato must have Braveheart goggles on because Star magazine reports:

From racist rants to violent outbursts, there’s no shortage of reasons to steer clear of Mel Gibson. But Jennifer Aniston’s pal and body double Ashley Cusato is getting a stern reminder from her A-list friend.

“Jen respects Mel as an actor, but he’s not the type of guy she’d want her friends to date – he’s a heartbreaker,” stated an insider, adding that Jen was stunned when Ashley broke the news that she’s been dating Mel for the past month. “Ashley insisted that he’ll be different with her, but Jen didn’t buy it.”

“Jen wants to be supportive, but she fears it won’t be long before Ashley is crying on her shoulder.”

Are we really worried that Mel’s a heartbreaker? Really? I’d be more worried about his nose-breaking capabilities because homeboy’s temper makes Chris Brown look like a choir boy. By the way, TMZ reported that Ashley’s a brown belt in karate. So… she can kick Mel’s ass if he starts getting way too familiar? I could see that happening if he’s drunk which is probably a lot. Caveat emptor on that one Ashley.

But way to go Jen. Way to be a friend. And she’s not just giving unsolicited advice to Ashley. According to OK! magazine, Jennifer Aniston warned Katy Perry to stay away from John Mayer because, surprise surprise  he’s a douche! But what does it say when both girls Jennifer talked to disregarded her advice? I’m not saying Jen’s wrong… she makes valid points about both men… it’s just her track records aren’t great. I can’t stand Do as I say, not as I do people.

Still, if Jennifer Aniston attacks Mel Gibson’s character then a friend should probably listen, right? Mel Gibson is entitled to second, third and fourth chances, but wouldn’t you rather he took them with someone else’s friend and not yours?