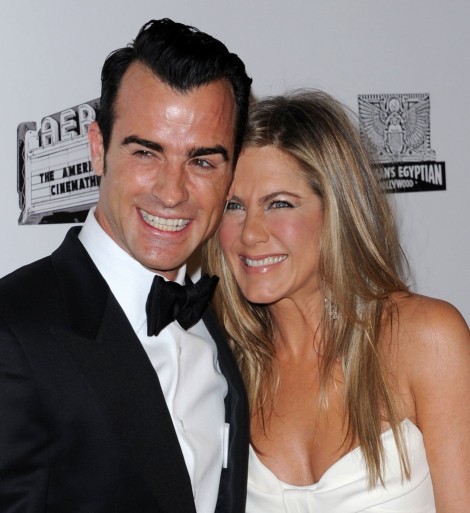 The changing of Justin Theroux has been happening for awhile now. It’s been gradual – one day the beard was gone, the other day the chains. And apparently the nice guy attitude was the last to go but Jennifer Aniston made it happen! Yes, Justin Theroux has turned into a snob and it’s all Jennifer’s fault, claims Star magazine. Case in point was at a recent L.A. birthday party thrown by Sacha Baron Cohen and Isla Fisher. Apparently Justin was acting like a “stuck-up snob” and the engaged couple “kept to themselves all night and avoided talking to Sacha and Isla’s other guests. It was awkward, since it was such a small party,” a source told the mag.

No source! You’re getting it all wrong. They weren’t avoiding other people. They were just too in love to realize other people were around!

Oh, but this wasn’t a one-time occurrence. The source said that ever since Justin turned into Mr. Jennifer Aniston he’s been incorrigible. “Before their engagement, Justin was very friendly. Now you’re lucky if you can get a high five out of him.”

The nerve! She took away his high fives!!

I could care less about Justin Theroux’s attitude. I’m assuming a lot of you feel that way. We only care about Jennifer. The couple were out last night at the 26th American Cinematheque Award Gala. Jennifer Aniston was there to honor Ben Stiller. I’ve attached some pics below. Damn she looks happy. Does he look smug? I always get smug from Justin but I got it way before he met Jennifer. He’s never seemed like a high fiver to me anyway. I get the artsy, esoteric, douchey vibe from him – but not necessarily in a bad way. As far as I know he’s not pulling a K-Fed and stealing all her money and spotlight. You can tell he doesn’t exactly mind the spotlight but he also doesn’t mind that she’s the cause of it. That’s important. He yields to that. He’s no Danny Moder or anything but he’s also no Casper Smart so I can deal. As for the spoiling, Jennifer Aniston is supposedly buying him a $100K Porsche. Is it considered spoiling when you can buy it on your own but your fiance gets it for you anyway? Why aren’t there more Kim Kardashian spoils Kanye West stories? Maybe because he was a snob way before she came along!

I hate to say this but… aren’t the pics cute? I know Jennifer Aniston is selling something. I know she’s not really America’s Sweetheart. I know she plays the game just like everyone else – maybe more…. But they look so damn cute!