Jennifer Lopez Betrayed by Casper Smart on her Birthday (Photo) 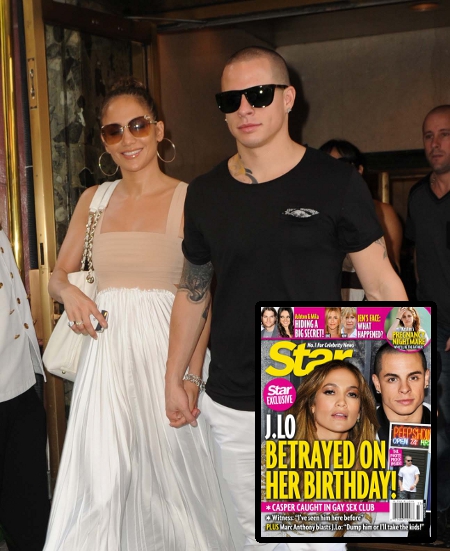 Jennifer Lopez was betrayed by Casper Smart on her birthday! According to the upcoming cover of Star Magazine, Casper Smart, her back-up dancing boyfriend, was seen leaving a gay sex club in the early hours of the morning. On top of all that, a witness at the club says that Casper has been spotted at this 24-hour peepshow before. Uh oh, let the drama ensue. What is J. Lo going to do now? If she wants to keep him bad enough, she better run out and buy her lil’ boy toy a present before she loses him to a new man.

Based on this story, which we touched on a few days ago when the news first broke, it looks as if Casper has a few secrets he’s been keeping from his sugar mama.

Whatever the reasons are behind his wild sexcapades, one person, besides Jennifer, is clearly upset. And that person is Marc Anthony, Jennifer’s ex whom she divorced earlier this year. Whether he’s fed up with Casper’s secretive ways or just Jennifer’s wild rompings with younger men in general we’re not sure, but it’s quite clear that Marc isn’t a happy camper, as he’s threatened to take away the kids if she doesn’t kick Casper to the curb ASAP.

“Dump him or I’ll take the kids,” Anthony is credited with saying on the cover of the magazine. Harmless threat? Or is there some substance behind these stinging words? It looks like Casper and Jennifer are going to have to sit down and have a serious talk soon. Is Casper only in it for the money or does he genuinely love himself some J. Lo? When the full story is released we’ll be sure to update you; however, in the meantime, we’ll just have to let Casper ogle at his stripper pals in peace.