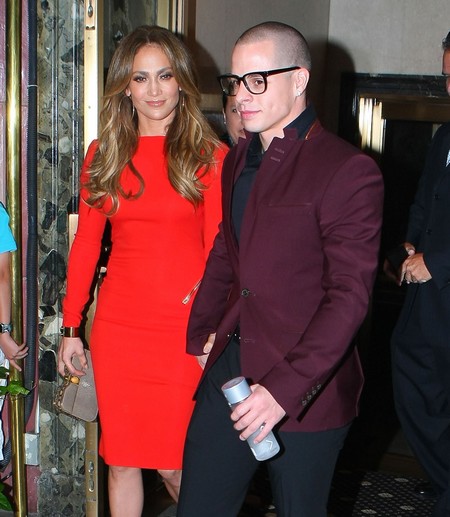 The Casper Smart gay stories continue. Casper has been troubled by rampant sexuality rumors. He hasn’t been all too ‘smart‘ about it, because Jennifer Lopez’s toy boy was snapped visiting a booth which gay men regularly frequent.

Bimbo Winehouse did an expose on the “love booth” that J.Lo’s BF was caught going inside of. Bimbo allegedly knows the booth very well and alleges that the booths are used by gay men to have relations.

Is this a nightmare we could never wake up from? Have we been transported to a corner of hell no-one has ever visited? The video by BimboWinehouseTV is theatrically macabre, like a horror film filled with the goriest things you could possibly dream up. Please, do yourself a favor and watch it, your mind will be warped forever.

Casper “The Friendly (gay) Ghost” is seen entering a secret peep show on the snapped pictures. The images look like the seedy underbelly of a David Lynch film, complete with neon signs and creepy looking large men. Casper’s short dancer frame swiftly entered the building, with decked out pimp shoes while typing on a smart (get it?) phone.

We have to ask, is J.Lo completely blind? Did her “gaydar” get fizzled by a strong wind and Enrique Iglesias sweat, seeing that they’re on tour together?

We only hope that these images don’t make their way to her desk. The thought of J.Lo going maudlin on us is too much to handle. She was at times too fragile to send home contestants on American Idol, so this might just result in J.Lo crying until she is as dehydrated as a Vaseline pot in a stripper’s dressing room.

Let us know in the comments below if you think Casper is getting smart with men in seedy booths.