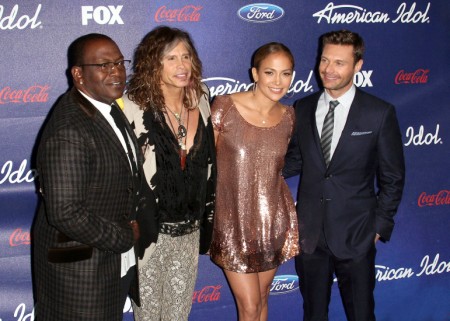 Jennifer Lopez might have been trying to save face when she told Ryan Seacrest she was quitting American Idol on her own accord because rumors are circulating that Jenny from the Block actually wanted to stay on the reality singing show but was told to take a hike when she asked for more money.

The Wrap reports that Jennifer has gotten greedier every year since she appeared on the show. Her fees jumped from $12 to $15 million in between seasons one and two and she was asking for a cool $2 million more to keep her famous ass in the seat for her third. But the website explains that Fox didn’t think Jennifer was living up to her end of the deal.

When she asked for another $2 million, the network surprised her by not making a counteroffer. “Idol” lost its top spot in the ratings to NBC’s “Sunday Night Football” last season after eight years of dominance. In their two seasons, Tyler and Lopez helped prop up the show. But they could not return it to its former dominance as the sing-off market became glutted with competition, including NBC’s “The Voice” and Fox’s “X Factor” from ex-“Idol” judge Simon Cowell.

I don’t blame Jennifer for asking for more money. It was a win/win situation for her regardless. If Fox chose to pay her and she stayed then she would maintain her name in the spotlight and get richer. However, since she’s leaving, she still enjoys a career resurgence and can go on to make movies again (which is the only thing she’s actually not horrible at doing). So Jen may look like she got the short end of the stick in these negotations but really she’s just a smart business woman. She took a chance for more money, probably already knowing Fox wasn’t going to give it to her, and used it as her excuse to leave.

What do you think about Jen’s departure? I can’t at the moment because I’m still envisioning Mariah Carey on the judge’s panel and my heart won’t stop singing with glee. Jennifer ain’t got nothing on Mariah – both in talent and personality. And I definitely won’t miss Jennifer’s Kevin Federline 2.0, Casper Smart, gyrating on stage like he owns the place. I’d rather see ‘dem babies!