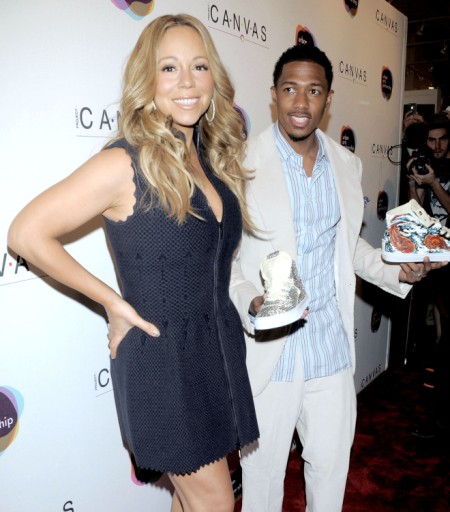 Mariah Carey is still so crusty over her X Factor deal falling through a couple years ago and eventually going to Britney Spears that she’s seriously considering replacing original judge Randy Jackson on the American Idol panel this upcoming season.

Payback’s a b-tch Simon! Just two months ago, Mariah appeared to still be smarting over the fact that Britney got offered $15 million for a one-year deal on the X Factor. According to Hollywood Life, she told Extra. “You think I focus on that stuff? Have we met? I love her [Britney Spears], honestly, I think she’s a very nice person, but I don’t care who’s going on that show – as long as it’s not me.”

Perhaps $15 million just wasn’t enough to wet Mariah’s healthy appetite. Jennifer Lopez reportedly took home $20 million last season for her Idol duties but she’s been hinting about quitting the show while winking to the cameras and mouthing “I’m leaving!” every other day which would free up that chunk of change for Mariah. Showbizspy reports Idol wants Mariah to liven up the show which recorded its lowest finale ratings ever last season. “[Show producers] think they need to freshen everything up now,” sources told Us Weekly. “They are in serious talks with Mariah and it’s very close to being a done deal. And they will move Randy into a more mentoring role.”

This isn’t the only shake up going on. With Steven Tyler quitting, the show may need to replace all three judges and names like Adam Lambert, Charlie Sheen and Jerry Lewis have been thrown around. Obviously, Idol is desperately trying to compete with the X Factor’s brilliant move to sign young bloods like Spears and Demi Lovato. Their talent is questionable but their appeal is not. A day can’t go by without a story breaking about Britney fuming off stage or Demi yelling at contestants. They’re already returning Simon’s investment and the season hasn’t even started yet.

If Idol bags Mariah it will be a major coup. Not only does Mariah have more talent than Demi and Britney combined, she’s also a hell of a personality. Most of the time, Britney looks like a scared bird in front of the cameras, afraid to open her mouth. Mariah will rip you a new one for looking at her sideways. She has so much potential for good ratings! You add Charlie Sheen and I might just start watching American Idol again!