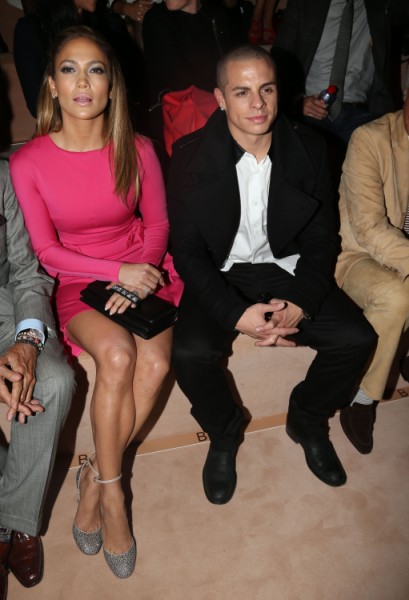 It’s worse than I thought. Not only have Jennifer Lopez and Casper Smart been joined at the hip while they’ve been enjoying Fashion Week in Paris but now they’ll be joined for the rest of their lives! Well, if Jennifer’s track record is any indication it might not be that long. Jennifer Lopez got engaged to Casper Smart!

Well, at least we think she did. I don’t know why I didn’t pick up on it sooner. JLo’s been sporting a massive rock on her ring finger and she hasn’t been hiding it. It’s almost like she wanted everyone to see it. I thought it was just an ordinary diamond at first but then she wore it again and again and again. She even wore it when she dressed down to go shopping with Casper and her kids.

And she hasn’t been wearing much else. Jen’s kept it pretty minimal on the jewelry front in Paris and she isn’t exactly known for her less is more approach. Take a look at the pics below. It’s the same ring in every pic, right? She knows she’s getting papped and is flashing it all over the place. I love the one where she’s holding Max and has to readjust her sunglasses right in front of the paparazzi. The camera had to have been right in front of her face. She knows what she’s doing. This clearly isn’t Jen’s first rodeo. How many times has she been engaged now? Five? Jen knows how to debut an engagement ring.

So how do we feel about this? You know how I feel. I’m disappointed but I’m not surprised. Jennifer cannot be alone and likes to be married or engaged. It’s her thing. And why do I have to be so cynical? It might last, right? Age has to have taught her something. I’d like to think age taught her not to marry back-up dancers anymore but it can’t teach you everything! Is this the reason for all the botox? I’m sensing some Demi Moore-like problems in Jen’s future.

What do you think about the Jennifer Lopez engaged rumors? That’s not just any ordinary ring is it?