Too Much Botox? Jennifer Lopez Desperate To Stay Young For Casper Smart (Photos) 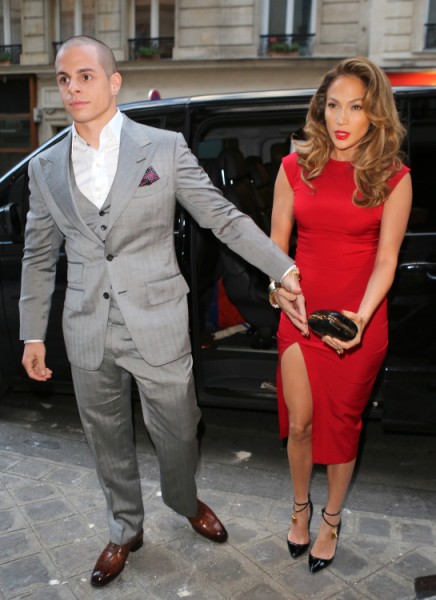 Jennifer Lopez has been all over Paris this week. Unfortunately that means Casper Smart has been too but we’ll get to him in a moment. Yesterday Jen attended the Barack Obama fundraiser held by Anna Wintour and today she showed up for the Chanel Photocall at the Grand Palais. I absolutely love what she’s wearing for the Chanel event. It’s so soft and almost ethereal. It’s hard to look delicate with your hair pulled back so tight but she manages to make it happen with some good make-up. The same cannot be said for the fundraiser look.

Like I’ve said before, I’m absolute sh-t when it comes to pointing out plastic surgery but Jennifer looks like she’s getting happy fingers with the botox. A little too tight, yes? She’s got that cat face going on a la Kim Kardashian. I absolutely hate that look. Why does everyone want the cat eyes? It’s not cute anymore (as if it ever was). It just gives the allusion of plastic surgery gone bad now. I blame it on the make-up artist but Jen has had that look before. She obviously likes it but I appreciate her less is more approach at the Chanel event. She doesn’t look nearly so tweaked there. Maybe her people saw the pics from the night before and slapped each other.

So now on to Casper. He’s still in the picture. Still very in the picture it would seem which is annoying since I let myself hope they were finally over after the last stream of break up rumors. Marc Anthony must have told her to get over herself when she asked him to take her back... or that story could have just been full of sh-t. Regardless, we are stuck with the boy toy a little longer. Is that why Jen keeps sticking needles in her face? She’s in her forties. Even the most confident woman in the world would have some insecurities about her age when dating a younger man. If Lopez was dating Ryan Gosling then I’d give her a pass for wanting to Ponce de Leon her wrinkles away but this is Casper Smart. You could look like Mama Elsa from The Real Housewives of Miami and he’d still screw you for your money. No offense Mama Elsa, I love you!

Anyway, take a look at the pics. Tell me what you think. Too much botox? Jennifer Lopez is a fan of piling on the make-up so could it just be too much powder?