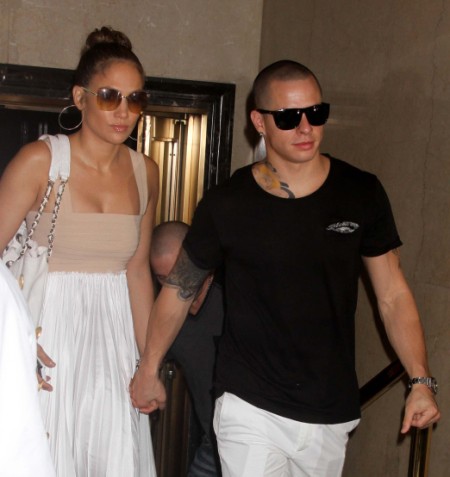 Are we all letting out a sigh of relief that she won’t have to pay this guy a divorce settlement? Jennifer Lopez is showing signs that she is actually maturing with age and ready to present her backup dancer boy toy his walking papers. Radar Online reports Jennifer has grown disenchanted with the relationship and has finally realized after dating just under a year that her 43-year-old self has nothing in common with Casper Smart, the 24-year-old moocher extraordinaire.

“Jen is currently on tour with Enrique Iglesias, and Casper is the head choreographer of her show in which he also dances. It’s tough being on the road — this isn’t Jen’s first tour and she has been feeling more like Casper’s babysitter than girlfriend. Casper likes to hang out and party with the other dancers and that just isn’t Jen’s scene. She is all business and is the utmost professional. Jen is absolutely going to break up with him, they just don’t have a long term future together,” a source told Radar.

Whew! [Imagine me wiping the sweat from my brow]. I knew that, and I’m pretty sure you knew that, but you never can be so sure about Jennifer. I saw Chris Judd written all over this guy and was positive a marriage was imminent. But it turns out Jennifer just needed to be needed and now she doesn’t need it anymore. She’s got two kids. She doesn’t need another. Casper was obviously a rebound she started dating two seconds after she divorced Marc Anthony, and for once Jennifer is doing to rebounds what most people do, saying thanks a bunch and moving on.

Unfortunately for Jen, she’s allowed Casper to immerse himself so deeply in her life and career that extricating herself from her “Bear” will prove to be a tad difficult. But the source says Jen has a time and a plan for when to start fresh. “Casper will most likely be sent packing when the tour ends in Miami. Jen admits that she fell for Casper and that he was exactly what she needed at the time to help get over her painful split with Marc, but she is just ready to move on now.”

Well good for her. Do you feel sorry for Casper? I don’t. Jen’s like George Clooney. She leaves her flings (and ex-husbands) will lots to remember her by so I don’t think Casper will be hurting for cash or exposure. He’ll quit dancing, milk the attention for all it’s worth while he’s not on her leash anymore, and then probably just go back to dancing when he realizes no one cares who he is without Jen around. Harsh? Maybe, but true. Jen’s been working on getting him TV deals, and I’m not sure if any of those went down, but some network somewhere will film him doing something. Even Chris Judd had a show on MTV after his split with Jen. They were married for a few minutes though first which helped.

It’s amazing though, and I have to give Jennifer credit. All the time we thought he was using her for her money (and as a beard), she was actually using him. It’s so nice to be wrong sometimes! She divorced Marc and didn’t want to be alone so she got herself a boy toy and a stable show like American Idol and boatloads of cash. She raised her exposure, came out with some new music, worked on her abs and she’s back on top again (or closer than she was at least). She knows she can do better, and when a woman realizes that again, her feet begin to itch, so now Jen’s walking.

I’m not going to bother asking if you’re upset about this break up. I can assume we pretty much all are super stoked. I will ask a better question. Who should Jen set her sights on now? Don’t say P. Diddy or Ben Affleck! Give me your gossipy best! If you could choose a hot actor/celebrity for Jen, who would it be? Because you know she’s not going to preview the trailer park this time. Jen’s feeling good about herself. She wants A-list. George Clooney? That would be hot. Tom Cruise? Jen’s more into Scientology than she lets on. Hells yes! Tom Cruise. That’s my pick! Give me yours!