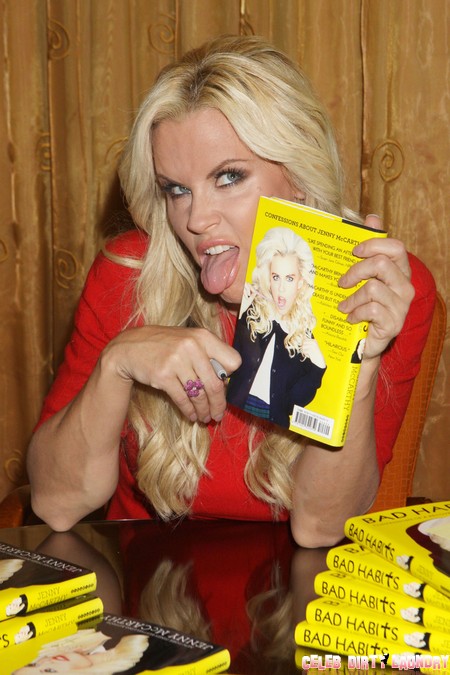 Playboy Centerfold Jenny McCarthy reveals juicy details about how a handful of ecstasy led a bevy of bunnies into a lesbian smooch fest on a Hawaiian beach in her new book. The memoir, titled Bad Habits: Confessions of a Recovering Catholic, offers a funny and intimate look into the impoverished and strict religious upbringing of 1994’s Playmate of the Year.

Growing up on Chicago’s seedy south side, McCarthy reveals she had a major crush on Jesus, telling Good Morning America’s Juju Chang, “Jesus was my Bieber.” McCarthy had a collection of “I Love Jesus” t-shirts and says she wanted to be a nun until she found out the precluded motherhood.

While best known for her Playboy spreads, McCarthy is much more than a pretty face attached to a smoking hot body. The outspoken Autism advocate has written six New York Times bestsellers and has parlayed being a centerfold into a career any woman would be proud of.

Growing up in a devoutly Catholic household, McCarthy says, “My biggest fear throughout the book is that I was going to be possessed by Satan at any point.”  She may never have been taken over by the anti-Christ, but McCarthy tells about the dark and low points of her life in the no-holds-barred memoir.

Her new book features an angelic and prayerful McCarthy in a nun’s habit on one side and the flip side shows the flirty, sexier McCarthy we’ve come to know from her Playboy pictorials. This dichotomy is present in her real life as well. After watching her parents struggle to support their four daughters with meals never a certainty, McCarthy said she took her first Playboy to cover “all their bills and moved them into the suburbs.”

Despite struggling as a single parent to son Evan who suffers from autism, McCarthy has established herself as a brand that goes beyond the sexy. And despite recent setbacks to her love life – high profile break-ups with Chicago Bears linebacker Brian Urlacher and funny man Jim Carrey – McCarthy says, “I’m happy with myself. I don’t need to have a lover to have love in my life.”

McCarthy may quickly find herself back at the top of all the best seller lists – Bad Habits is already rocketing up the Amazon charts! Despite the sex, drugs and (I’m sure there must have been some) rock and roll, Jenny McCarthy shows that although she’s been no angel, she may yet earn her wings!