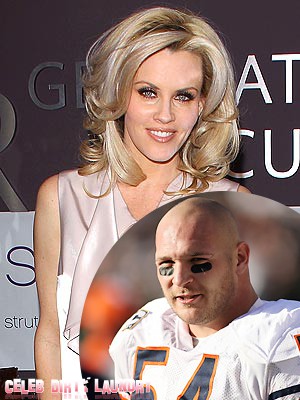 Jim Carrey who? Jenny McCarthy is no longer a sexy and single lady — well, still sexy perhaps, but no longer single.  Chicago Bears linebacker Brian Urlacher has snatched the Baywatch babe and Playmate up, her rep confirmed to E! News.

Well how long has this romance been going on for?  The two had dinner last night at the Italian restaurant RPM, owned by Bill and Giuliana Rancic.  The Chicago eatery wasn’t the first time they were spotted together either — Brian was Jenny’s date at the fifth annual Rescue Our Angels cocktail party benefiting her Generation Rescue foundation at Rockbit Bar & Grill

Jenny’s new man has two daughters and a son from a previous relationship, while Jenny herself is mom to 10-year-old Evan.  So are the two serious?  Last night Jenny told a reporter, “Go Bears, that’s all I can say.”

Well, isn’t that interesting.  Looks like someone has found some new love.  And Jenny totally deserves it — she’s an amazing philanthropist, and at 39 she is striping down for Playboy again this year.  I hope I look like that when I’m that age.

Dressed impeccably and looking gorgeous on her date last night, Jenny wore a bright blue pencil skirt dress and matching T-bar sandals. She posed with her fella and by herself, all the while looking like the confident lass she is. Her upcoming Playboy spread will appear in the July/August issue of the magazine. Keep your eyes open for that!

As for romance rumors, keep your eyes and ears peeled because these two look head over heels.