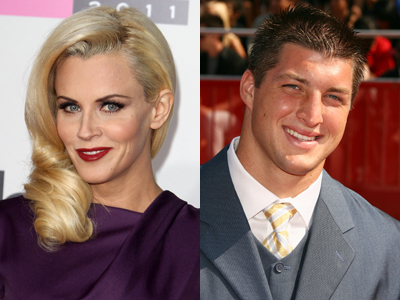 Reportedly, during this past Super Bowl in Indianapolis, Rosie introduced the 39-year-old actress to famed Denver Broncos quarterback Tim Tebow! Supposedly, Jenny, who broke up with Jim Carrey in 2010 and more recently ended things with another non-famous boyfriend, told Rosie that she had a crush on the football star during a pre-show interview, and the comedian couldn’t resist trying to make the love connection happen.

“Rosie jumped up and took Jenny by the arm and walked her over to Tim. She said to him, ‘Hi, I’m Rosie O’Donnell and this is Jenny McCarthy and she’s single. I think you two would be perfect together. Now exchange telephone numbers.’ Rosie then walked away,” said a source to the magazine.

Talk about a blunt introduction! Rosie apparently doesn’t like to waste time with small talk, but it seems that her strategy worked, as Jenny and Tim supposedly did exchange phone numbers and talked for a bit.

With celebrities like Katy Perry and Kim Kardashian also vying for his attention, Tim certainly has his pick of famous women to date right now, but we really hope he calls Jenny. We think they would make an adorable, if somewhat kooky, couple.