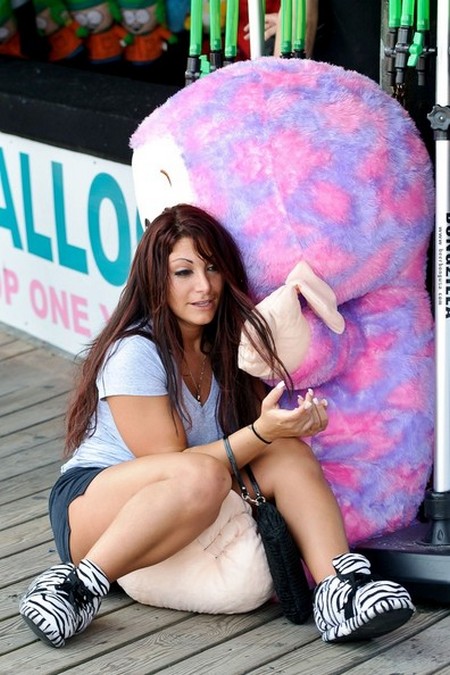 Looks like it was a rough weekend for Deena Cortese and rest of the crew after the Jersey Shore bar brawl.  The cast had a fight at one of their favorite hangouts and then there was arrest and jail for Deena. The Bamboo Bar brawl on Friday night  left Jwoww on crutches with a sprained ankle.

That didn’t stop them from trying to enjoy some fun in the sun. The crew headed to the beach to play some volleyball on Saturday and it seemed like the weekend may have been looking up.

Then two of the men involved in the earlier altercation now have lawyers one of them showed off a cut above his eye brow he said Ronnie Magro gave him while a security held him in a head lock. The two men are said to be suing anyone and everyone who happened to be near the group when things went down – including MTV and cast members.

Seems like the two may have been looking for easy money and the shore crew couldn’t resist a testosterone fuelled challenge. Pauly D knocked a guy out and Mike ‘The Situation’ Sorrentino was also involved in the fight though presumably not drinking. So was Jenni Jwoww’s boyfriend Roger Mathews.

Jwoww threw a drink in Rogers face and the two had a argument but he then went with her so she could receive medical attention for her hurt ankle. The crew was out partying it up on Saturday night at there favorite spot Karma but Roger was not with Jwoww maybe there argument was more serious – is it splitsville for the two?

Then on Sunday Jersey Shore housemate Deena Cortese was crying shortly before being arrested for interfering with traffic and for being drunk in public and she was slapping at cars – seems like the Jersey Shore crew is going to go out with a bang!! In one way or another … The only positive was that pregnant Snooki was MIA during this weekend’s excitement.  A Jersey Shore bar brawl is no place for an expectant mother.