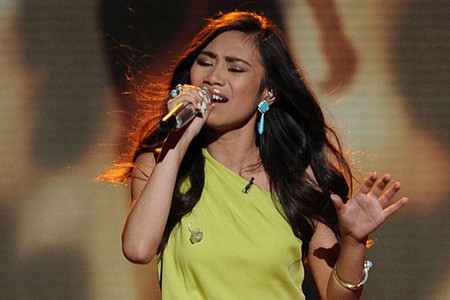 ROUND 3 – For the second round which was her new single Jessica Sanchez performed “Change Nothing”  tonight on American Idol.  The Top 2 took the stage and performed for their lives in the finale.  Did you miss tonight’s episode?  If you did we watched it and we recapped it here for you.  On last week’s show Joshia Ledet was sent home.   If you missed the show you can read our full and detailed recap here.  If you missed Joshua’s performances during the season you can see them here.

The contestants fighting tonight for the title of American Idol are: Phillip Phillips and  Jessica Sanchez.  Last week, producer Nigel Lithgoe revealed who was his favorite contestant, “I promised I would reveal my favorite when they were voted off the show so….. it was Joshua. However, I am thrilled for Jessica & Phillip.”

Judges Comments: Randy said, “I did not love the song, but you made something more out of the song, you have that Beyonce swag. You brought the song to life, but it was just ok.” Jennifer said, “you sang it well, I did not think your first single was going to be pop, but you will make many records and you need to say this is not me.” Steven said, “I know how good you can sing, but it was not the proper song for you.”