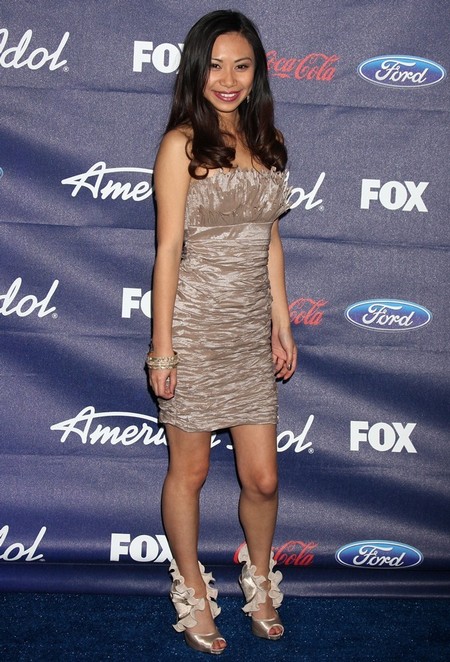 16-year old, Jessica Sanchez from San Diego, California who has been considered a front runner to win this season of ‘American Idol’ was sent home tonight by America when she received the least amount of votes.

Jessica has been singing since she was two years old and even competed in the first season of ‘America’s Got Talent’ when she was eleven.  She has previously said that she is inspired by her musical influences: Mariah Carey; Whitney Houston; Celine Dion; Etta James; Christina Aguilera and Michael Jackson.

Jessica is presently a high school student in San Diego, California and wowed the Idol judges from the beginning, but especially with her rendition of Whitney Houston’s “I Will Always Love You”. Although, America didn’t quite think the same way as the judges as Jessica is now the first female and the fourth finalist in American Idol history to receive the Judges’ “save”, when America gave her the least amount of votes, wanting to send her home.  I personally found the whole ‘save Jessica’ thing was a publicity stunt, it was a ridiculous amount of grandstanding by the judges.

After saving Jessica, Randy Jackson begged America to please vote for the best, isn’t that what they were doing? Jessica is a 16-year-old who doesn’t appeal to the public to the point that she has a large fan base, after all, she isn’t Miley Cyrus and she was desperately trying to be older than she actually was which could have been a turn-off for younger voters; if they did relate to her, she would never have had to be saved in the first place.

Now Jessica’s “Proud Mary” performance is a clear example of her trying to be older, her mimicking Tina Turner was awkward and embarrassing. Video HERE.  A good alternative would have been for Jessica to make the song her own, like fellow contestant Phillip Phillps does.

There is no doubt that Jessica is talented, but she is not the “end all” for a lot of people, including me. Basically she is lacking a personality that connects with the public and there are a lot of past Idol winners that know all about that.

Randy said that Jessica was “the best singer in America”, how crazy to even say that?

The outcome is determined by one thing, popularity, not talent and America had their say.

So what do you think of Jessica being set home, do you think she should have been sent home? Sound off your comments below and let us know what you think about Jessica’s Idol experience.