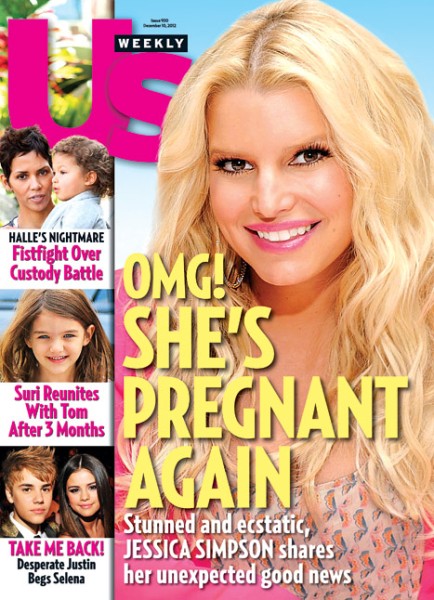 Is it sad when the first thing I thought about after I heard the news was all the muumuus we were going to start seeing again? Jessica Simpson pregnant is so much more entertaining than Jessica Simpson not pregnant. Buttered pop tarts and fried Oreos are better reads than lame gym outings and (make believe) carrot stick and celery binges. Yes, in the world of gossip, today is a good day. According to Us magazine’s cover, Jessica Simpson is pregnant again.

Just seven months after giving birth to Maxwell Drew, Jessica Simpson’s announcing a new bun in the oven with a glossy pic and a wide smile. She says it was an accident. Naturally. Jessica’s not exactly a planner is she? Must have been all that C-section sex she’s been grossing everyone out with. So if she’s telling everyone now then she must be at least three months along which means she got knocked up four months after having her baby. That’s Britney Spears territory. That’s straight up gross. When will women realize that breastfeeding is not a form of birth control??

So what does this mean for us? Unfortunately, it means more baby daddy Eric Johnson… blurgh. I’m ready for this boring freeloader to start packing. But does it mean more Weight Watchers? I think it’s pretty safe to say the weight loss giant learned its lesson on the last baby and won’t be calling Ms. Simpson anytime soon. Is this why everyone’s been pushing the story that Jessica’s back down to her pre-baby weight so much lately? So she essentially honored her commitment to Weight Watchers before packing on the baby weight again? I’m anxious to see how she handles this next pregnancy. She went for it on the first one and wanted to enjoy herself. Sure. Fine. Good for you. But then she made tons of comments after acknowledging how hard it was to get the weight off and that maybe she should have been more cognizant about what went in her mouth. Will she be more so this time around? Like Weight Watchers, will Jessica Simpson have learned her lesson? I doubt it but I can’t wait to find out!