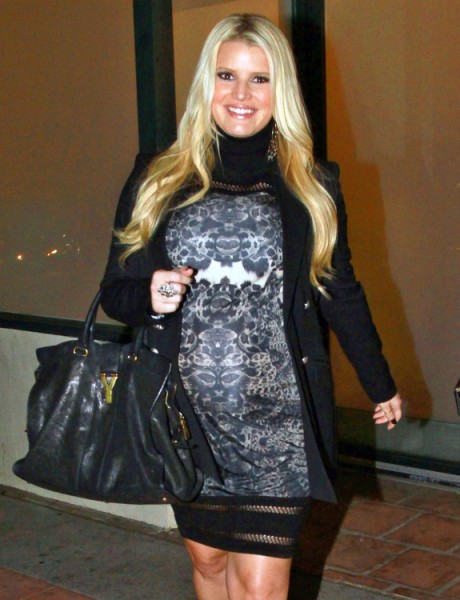 All of Jessica Simpson’s hard work is paying off because the reality star and new mom is finally seeing some positive results in the weight loss department. Jessica has lost 35 pounds since teaming up with Weight Watchers as its official spokesperson after the birth of her daughter, Maxwell Drew, on May 1 and can’t wait to make her great reveal to the legions of fans and probably her haters too.

“Jessica has already lost 35 pounds,” an insider close to the new mom tells Life & Style. “She can’t wait to reveal the results.”

Shedding the baby weight after giving birth to her first child, daughter Maxwell, on May 1 has been a daunting task for the 5-foot-3 star, the new face of Weight Watchers. Besides dieting, Jessica, who gained 60 pounds while pregnant, has reunited with her former trainer, Harley Pasternak.

“Jessica’s doing great!” her best friend, CaCee Cobb, tells Life & Style. “Are you kidding? She’s motivating all of us. We have our weekly Weight Watchers meetings, and it’s so much fun. We all keep one another on track.”

OK, let’s do the math. She’s lost 35 pounds in 8 weeks so that’s about 4 pounds a week. That’s actually pretty respectable. Don’t experts usually think losing 1-2 pounds a week is considered healthy? So she’s way ahead of the game. I’m not going to be b-tchy and say anything about the 10-15 pounds she probably lost right after the baby was born and subsequent breastfeeding, meaning she’s only lost about 15 pounds from actually working out and eating well, but whatever. Good for her. I pat myself on the back when I lose a few ounces after sweating in the sauna so I’m not playing tit for tat on that one.

She’s got 25 more to go. So we should be getting the great reveal by October? If she does it then she will have fulfilled her obligation to Weight Watchers to lose the 60 pounds within 5 months and have earned her $4 million.  And in time for Halloween? Oh, God, I can see her dressing up as Ana Steele in full bondage at a party to show off her body and her love for Fifty Shades of Grey. I’m calling it now!

What do you think of Jessica’s accomplishment so far? Are you still rooting for her or are you over it?