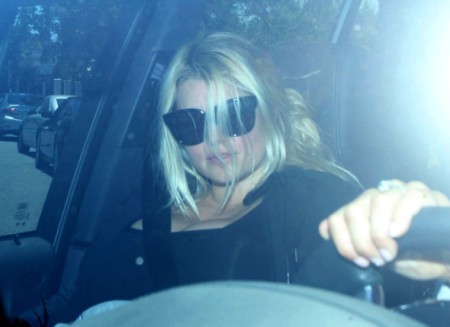 After two months of playing mommy to daughter Maxwell Drew, Jessica Simpson is rethinking the drastic weight loss plan she agreed to participate in with Weight Watchers and has decided to slow down and focus on her health rather than her waistline.

“Jessica is losing weight slowly,” a friend told RadarOnline.com. “She’s not trying to drop 10 pounds a week or anything crazy like that. She wants to do it at her own pace and make sure she’s healthy. Her goal right now is to lose one pound a week and Harley’s training program is keeping her on that schedule. Jessica is trying to work out as much as she can, but she is loving every minute of being a mom and never wants to leave her daughter. Jessica wants to be healthy for life, not just get super skinny quickly. She knows that she isn’t going to fit in size 0 jeans right away, she wants to be healthy for her daughter, her fiance and even any kids she might have in the future!”

A.K.A. Jessica doesn’t want to get up off that couch.

Listen, I will usually look for any reason to rip on Jessica Simpson’s laziness but I’m going to try to restrain myself. She’s a new mom. She’s posting a pic of that kid every other day on twitter. I understand she wants to continue to bask in her new baby glow. She should be able to do that. Everyone should  – but not everyone took $4 million to be a spokesperson for Weight Watchers. She needs to get to that gym. Allegedly her contract states she has to lose 50 pounds in 5 months. I’m no mathematician but that means losing 10 pounds a month. She’s on a pace to lose 4. We have to take into account that she lost a chunk when the baby and placenta and other nasty bits came out. And she’s breastfeeding, so that should help too. But leave it to Jessica to lazy her way out of it in the name of health.

Oh, I don’t care. Freak out at me. I’m not someone who thinks women need to lose the baby weight at Superman speed. I do think people need to hold up their end of the bargain. You think I actually care what Jessica’s waist measurement is? OK, I do a little, but not that much! I care that by taking tons of money she has put herself in a position to show ALL women that it’s so easy to lose weight if you have your own chef, trainer and lack of worries. Because guess what? It’s not! Especially if you have Jessica’s weak ass willpower and love of margaritas (sadly, like me). I’m not hatin’. I’m just saying, let’s call a spade a spade. Losing weight sucks. Jessica knows that. So don’t tell me you care about your health all of a sudden. Who wouldn’t want to lose 10 pounds in a week? Jessica would rather hang out with her kid and eat brownies. Me too – the brownies part, not the kid. I just wonder what the Weight Watchers people will say….

Do you think Jessica’s sudden health awareness is true or do you think home girl just doesn’t feel like hitting the treadmill?