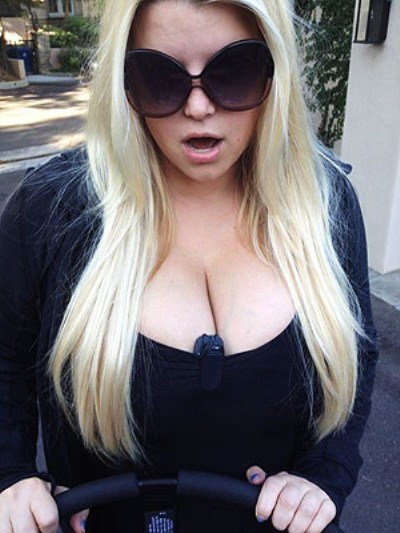 The road to weight loss has been frustrating for new-mom Jessica Simpson but things are bound to start looking up since she ditched the margaritas and enlisted friends to help her battle her bulge. Her 70-pound weight gain and subsequent Weight Watchers deal is becoming the stuff of legend and Us Weekly, print edition, explains that ditching her junk food habit is proving to be a lot harder than she thought it would be.

The scale has spoken – and it doesn’t have any good news for Jessica Simpson. A source tells Hot Stuff that Jessica learned at her first Weight Watchers weigh-in – a few weeks after the May 1 birth of daughter Maxwell – she had gained 70 pounds. Luckily, Jessica has $4 million worth of motivation to shed them.

Her contract requires a 20 to 30 pound loss by the end of August or no payday, says a source. But it won’t be easy.

“Jessica has always had issues with junk food,” says a Simpson pal. So Jessica has called in reinforcements: She enlisted her mom, Tina, and a few pals to do the program “to help keep herself in check,” says the insider. Simpson, who plans to breastfeed through July, also ditched her beloved high-calorie margaritas, adds the source. “She had a few drinks postpregnancy, but then stopped.”

I’m not going to sh-t on Jessica for drinking while breastfeeding. That’s just mean. I can only imagine how fast I’ll run to the nearest bottle opener when I’ve got some wine in front of me, post baby. It’s not harmful if you drink in moderation while breastfeeding – although there is collateral damage. My sister brought her six-month-old to Disney World on our family vacation and I made her leave the baby at home to go out drinking. She barely drank that night because she’s the responsible one but did breastfeed the next morning. That little monster was a holy terror the whole day, crying and ultimately ruining my Epcot adventure. I didn’t encourage her to drink for the rest of the trip. I’m just saying… mother’s know what’s best when it comes to their babies and breastfeeding. I stay out of it.

What I do get annoyed about are the margaritas. Do you have any idea how many calories are in margaritas?? Tons. They’re like the highest calorie drink you could possible have. Having said that, they’re delicious and always make me feel like I’m sitting on a beach, which is one of the best feelings in the world. But come on Jessica! Use your head! Everyone’s watching you right now! Have some wine or a beer or a SkinnyGirl margarita. Oh Bethenny Frankel just saw dollar signs!

I know. I know. Why can’t I stop being a judgey b-tch and be more empathetic? I am empathetic – towards people like Hilary Duff who are trying to lose the weight without $4 million incentives. Jessica’s weight loss is no longer her own business and she throws herself out there to be judged. She’s making money off her weight and people like me who are following her every step of the way. Do I want her succeed? Of course. Is there a sick side of me that wants her to fail? Of course. It makes for better gossip that way. Just kidding! No, not really.