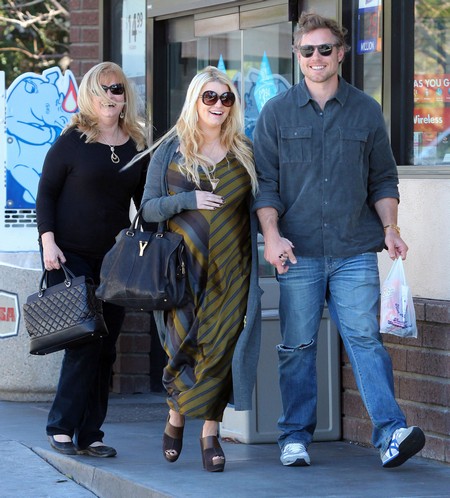 Jessica Simpson’s upcoming marriage is at risk due to her desire to continue on Fashion Star after giving birth to baby Maxwell.  Jessica is caught in a conflict between her father, Joe Simpson, and her fiance, former NFL star Eric Johnson.  Quite simply, Eric wants Jessica to retire or at least take a long maternity leave but her uber-contolling dad, who derailed her marriage to Nick Lachey, says that Jessica needs to continue working.

The bottom line is that Jessica finds herself torn on the one hand between her career and her loyalty to her dad and on the other hand her love for baby Maxwell and Eric.  A close contact of Jessica says: “Her biggest panic is that she’s going to lose everything: her looks, her career, and that she’s going to be a bad mother on top of it!”

If Jessica does not stay strong she could lose Eric.  Her father looks upon Jessica as his personal business operation – and he feels threatened by a strong man like Eric.  Joe would have loved to have hand-picked Jessica’s man – like Britney Spear’s owner father Jamie Spears did when he hired the stooge, Jason Trawick, to marry her. Let’s hope that Jessica is strong enough to tell her dear old dad to flock off.

OK! Magazine print edition, May 21 reports:  Torn between her new baby and her career, Jessica worries that marrying Eric is a mistake

As Jessica Simpson held her new daughter, Maxwell Drew, in her arms, while her fiancé Eric Johnson looked on, her happiness was complete – yet she was also aware that the clock was ticking.  “Even with music and acting and being a mom and anything else that I want to do, I know that I can do it. Life is definitely always about expanding. That’s how we grow.”

“Fashion Star makes Jessica happy.” Says a close insider, who says that she doesn’t want to give it up despite the stress it causes. “She says it helped her find her passion again. It gave her something to do that she loves so much as designing.” In fact, inspired from her work on the show combined with her pregnancy, Jessica added creating a maternity line to her list of future goals.

That’s not something Eric was enthusiastic to hear about. The former NFL player turned businessman, who began dating Jessica in May 2010 and became engaged her six months later, believes that she should slow down and think about her new family.

“He is on the wedding and baby kick,” confides the close insider, who adds that Eric doesn’t understand where Jessica has so much less time for him now. “He first met Jessica when she was in a more easy-breezy part of her life, where she wasn’t constantly having to worry about call times and scheduling conference calls to promote the show,” explains the insider.

Now that their daughter is born, Eric has gone from suggesting that Jessica slow down to insisting that she start making her new family her biggest priority. “Eric is pretty much demanded that she give up the show,” reveals a family insider. “He just sees it as too much stress for her. He wants her to be happy.”

Her feelings are so jumbled that she is having second thoughts on marrying Eric. “She’s totally worn out and her hormones are trying to rebalance itself, so she’s all over the place,” says a confidant.  “She got so emotional she lashed out at Eric, telling them she doesn’t want to get married anymore.”

Jessica’s father, Joe Simpson, who has piloted her career from when she was a teenager, also believes that Eric should butt out. He is adamantly opposed to Jessica quitting fashion Star or taking a long maternity leave.

“Joe told Eric to mind his own business and to leave the business affairs to him and Jessica,” says another family insider. “He told him that they know what is best for Jessica.”

But being treated like a child or an outsider did not sit well with Eric, who turned on his father-in-law. “It really pissed him off,” says the family insider, adding that the hard feelings set the stage for future showdown.

“He told Joe that he isn’t just a sperm donor. He cares just as much about Jessica as Joe does.”

What do you think?  Is this a real problem or just some loose talk designed to stir up trouble?  Joe Simpson has a history of messing up Jessica’s love life big time – just ask Nick!  Let us know what you think.