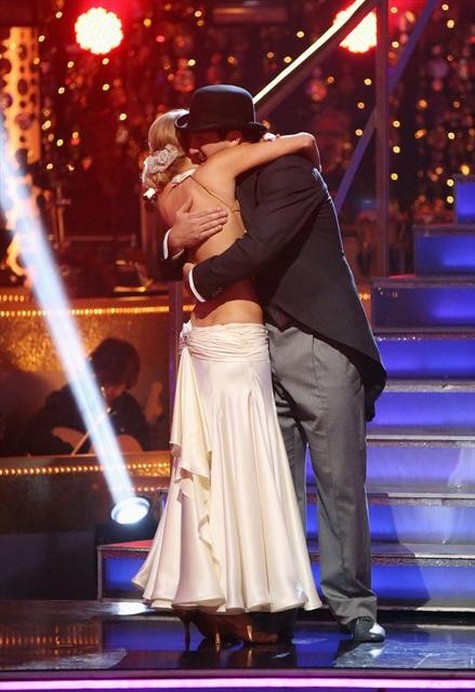 It’s like experiencing reality television Post Traumatic Stress Syndrome. In the first shocking elimination of the DWTS All-Stars season, Joey Fatone and Kym Johnson were eliminated, even though we all know Bristol Palin and Mark Ballas deserved to be sent packing.  Take a look at Joey’s last performance, the Quickstep here! Yes, let’s discuss the elephant in the room, the dancer on the mirror ball, the Donna Summer hair do. Let’s discuss DWTS and how the show is so easily able to dupe viewers into believing their votes make a difference.

Politics do not belong in the world of reality television. If there was a place for politics in reality television, we would have been voting along political lines. We don’t. We don’t vote on American Idol or X-Factor for the contestant who supports our favourite political leader. We vote on talent and popularity. That’s it. However, during the 11th season of DWTS, all of this changed when Bristol Palin was revealed as a contestant on the new season. Mark Ballas became her professional dance partner and even though they scored some of the lowest points of the season, they still managed to stay in the competition until the finale. Political oriented fans of the Palin family formed voting blocs and held candle lit vigils to nudge their favourite Palin into the finale (and record books) of the competition. It was one of the most controversial reality television moments in U.S. history and subsequently pointed a middle finger at the rest of the celebrity cast who danced their eyes out each week to further themselves in the competition.

Bristol Palin’s re-entry into the All-Stars season led many fans of the show to mutter “cheater” under their breaths. Several of the other celebrity voting blocs closed down their Facebook pages, switched off their television sets and walked away into the sunset. No-one wanted to expend energy on a show that was quite clearly rigged by voting blocs. After last night’s shocking elimination, it clearly proves that Palin’s voting blocs are back in full force and even though the controversial Palin/Ballas scored the lowest points of the week, they were still saved by an accumulation of flag-waving fans. Should Palin be blamed for the results? Should she be held accountable? Or is this scandal integrally part of the core of the U.S. television watching audience?

Unequivocally no, Palin should not be blamed for her staying power. She should, however, be blamed for her behavior and paranoid self-indulgence on set. During the judging, after her performance, she muttered, “It is what it is. I’m going to get sixes no matter what. … I don’t … whatever … it’s all good.” There’s no conspiracy against Palin and no-one is out to ridicule her in front of millions of viewers, but she allows her immaturity to shine through and question the scores given to her. What does she expect? If she had any integrity, she would have released a statement/press release/interview and asked viewers to vote for the “best” contestant in the group, and stay away from voting along political lines.

We stay as far away from politics as possible on Celeb Dirty Laundry, but results like these force us to tread the thin line between politics and religion and discuss the finer arts of viewer manipulation. The DWTS producers are largely to blame for this awkward television situation. The U.S. elections are a month away and the producers know viewers will be flared up to vote for their political party. Bristol Palin is not on DWTS due to her talent, popularity or brilliance; she’s on the show to be used as a viewership gaining tool. If the producers were really worried about déjà vu, they would have excluded Bristol from the show out of fear of controversy. They did not do this, but rather decided to include, once again, one of the most polarizing contestants in the history of reality television.

They are using the U.S. elections as a background to drum up viewership, which in itself is absolutely despicable. Viewers should not be subjected to the use and abuse of reality television producers. Viewers are supposed to observe and experience the show on an objective level; until the fourth wall is broken and the viewers are allowed to vote for their favourite contestants (this is one of the reasons why reality television became such a phenomenon). Currently, during the 15th season of DWTS, this observer/voting method is being abused by the producers of the show. Once again, politics do not belong in the world of reality television, especially in a show that is as campy as a glitter party in Mykonos. We don’t watch television to have our intelligence questioned by quickie producers and seductive production techniques; we watch television to indulge in a simulated reality.

We’re not certain whether Palin and Ballas will once again edge their way into the finale with the worst scores of the season, but we’re one hundred percent sure that if this were to happen again, DWTS will be pressed against the guillotine of public opinion, and heads will roll.