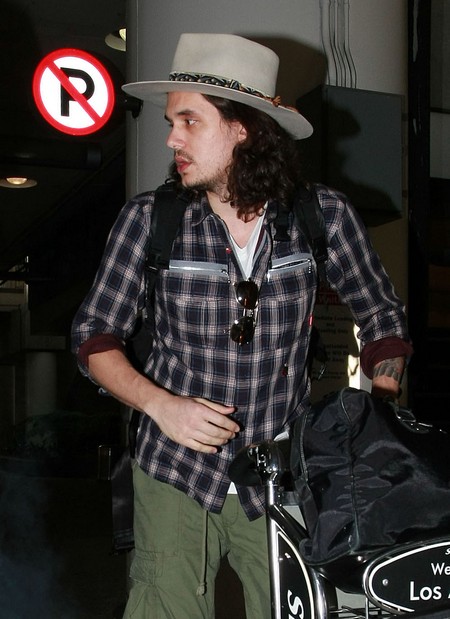 John Mayer has been linked to an assortment of Hollywood females, from Jennifer Aniston, to Jennifer Love Hewitt, Jessica Simpson, Taylor Swift and Minka Kelly. We wouldn’t say he has emotional issues, nor that he might be a sex addict in disguise, but having so many women on one plate is like being a waiter with ten billion tables to tend to.

Mayer was spotted with Katy Perry leaving the Chateau Marmont Hotel in West Hollywood. The Paps snapped like fools and Katy tried to shield her face from the horde of flashing light bulbs. Katy recently, very publicly, split from her short marriage to comedian Russell Brand. Now the difficult question, is John Mayer tapping Katy Perry like some teenage dream? He fits all of the Katy checkboxes – he’s a brooding man with dark eyes who is poetically shaped around his guitar. All Hollywood women fit Mayer’s checkboxes, so we’re not even going to go there.

According to TMZ.com, it is unclear whether the two were hanging out or being naughty adults, but from the images snapped of them getting in the car, it seems that Katy knew the media would be on this like a Justin Bieber fan.

A Mayer/Katy collaboration will be a dream-like induced state of bliss for both of them. He breaks hearts and she can’t sing – a match made in heaven! It’s no Teenage Dream, but at least they have one another when the zombie apocalypse happens at the end of 2012. There’s nothing like hitting zombies in the heads with guitars and microphones.

Here’s to you Mrs. Future Mayer, may your life be filled with all of the joy and bad pop you could possibly dream up!

What do you think? Are the dating? Let us know in the comments below.