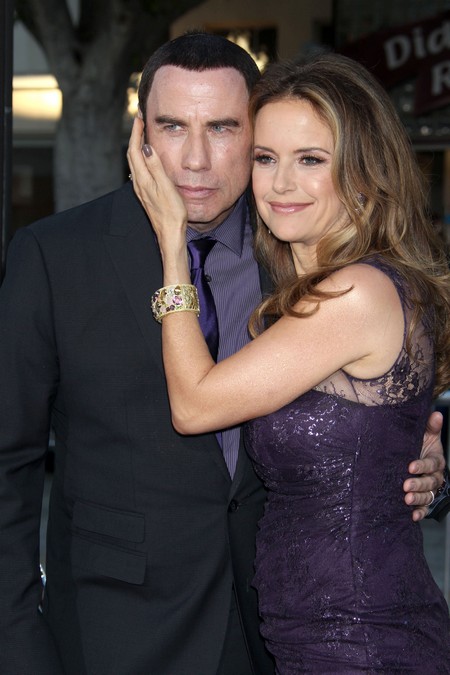 John Travolta and Kelly Preston went on a little international trip, to none other than the gay capital of the Mediterranean – Mykonos. Wait, please just hold that thought. We need to catch our breath. We’re laughing so hard at the irony of this that we actually popped an artery in our brain.

You may all remember John Travolta’s little gay sex scandals, and we’re really not trying to make all sex scandals gay, but he did have some sexy time with guys and (G)reasy hands and small buttocks. We bet Johnny Travolta’s inherent homosexual struggles went all Battlefield Earth in his psyche at Mykonos.

Mykonos is a Grecian island that is famous for its vibrant night life and nude beaches. Several of the clubs in Mykonos have the lovely names of “Ramrod” and “Diva”, where Tina Turner and Bette Midler collide in a sparkling lip-synching sing-off.

“Johnny walks to the stage. He slams his whiskey down on the table and starts singing, ‘At first I was afraid, I was petrified…’ Tina Turner cries in her bedazzled dress and Bette Midler says to Johnny, ‘Mr. Travolta, did you know you are the wind beneath my wings?’”

John and Kelly weren’t rolling down the river, nor were they one another’s private dancers, but they did walk hand in hand down the glittered paved streets before stopping in at a local café for lunch. There’s no word on whether the waitress resembled Liza Minnelli, but we do know they ordered the “Cabaret” special, which consisted of a sausage and two eggs on a plate made from unicorn sweat.

Okay, we apologize for our blatant stereotyping and drag queen jokes, but wow, just… Just wow. Why would the already damaged couple decide to go to one of the gayest places on the planet if the husband of said couple has already experienced more gay sex scandals than an episode of Queer as Folk?

The couple returned safely home after their little Euro outing, but Kelly Preston allegedly found Lucille Ball’s wig in a trash can at the airport…