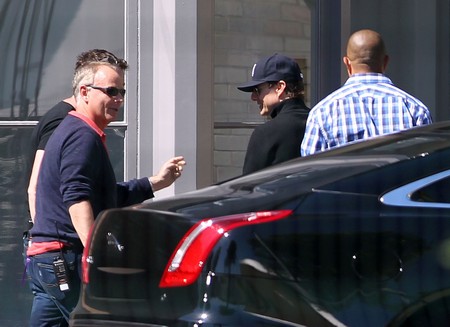 John Travolta was adored by females all over the world back in his heyday. Today, he is a flailing actor with a gay sex scandal and some of the worst movies in cinematic history behind his name. Travolta is restless and blames Tom Cruise for his emotional meningitis.

Travolta is allegedly disgusted that Cruise “rolled over” in his divorce from Katie Holmes. Travolta and Cruise have been close friends because of their association with Scientology, but sources now claim that Travolta unleashed a “vicious” attack on Tom behind the scenes.

What is this? Travolta looks like a Botox filled mannequin man-baby. He can’t even unleash a vicious attack on a failing bladder!

Travolta is so angry at Cruise’s “weak” behavior that he believes that he should be getting the most important honcho at the Scientology church, not Cruise. Sources [National Enquirer Print Edition, August 8, 2012] say, “John is at war with Tom — it’s a huge blowup. John believes that Tom looked very weak in his divorce from Katie. John insists that neither he nor his wife, Kelly Preston, would ever give up on their marriage so quickly.”

Speaking of marriage, Travolta shouldn’t be so generous with his advice. The actor has recently been involved in a bigger scandal than Kristen Stewart’s breasts in Rupert Sanders’ face and almost destroyed his marriage with a homosexual cheating scandal. Travolta was allegedly as pissed as a drag queen without a wig at a Tina Turner lookalike camp, because of Cruise not supporting him in his recent masseur drama. The sources say, “John was hurt that Tom didn’t stand up for him. While others in the church got behind him, he was seething that Tom, who’s considered Scientology’s top celebrity, didn’t say even one nice word about him. So when Katie blindsided Tom with the divorce filing, and he seemed to give in without any type of fight, John went on the attack.”

According to a friend, Travolta accused Cruise of making “a laughingstock” of Scientology, “He thought Tom didn’t ‘man up.’” In sharp contrast, Kelly has stood by John’s side despite the rumors of gay escapades that have followed him for years. “John has always managed to rebound from his scandals by whisking Kelly off on exotic vacations. He’s repaired the marriage and done so in a very public fashion.”

Cruise has been the proverbial smiling Gandhi of the Scientology church due to his relationship with the Scientology leader David Miscavige. The source says, “They’ve treated Tom like he’s a demigod.”

Travolta has been left out to dry like our sleeping grandmother in the warm sun. The source adds, “It’s been gnawing at him all these years. Now he feels it’s his turn to be on top.”

Would you trust the man who starred in Battlefield Earth with your religion? Didn’t think so…