Johnny Depp And Vanessa Paradis Gearing Up For Custody Battle 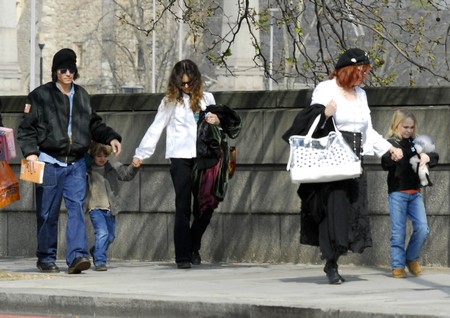 Johnny Depp and Vanessa Paradis recently went their separate ways publicly after 14 years of de facto marriage. Of course those of us in the know said their relationship was all over but the crying months ago. They have two young children together and the custody battle is about to begin, so strap on your typecasting and phone Tim Burton!

Hollywood Hiccups has the inside track on the story: “Vanessa is furious and ready for a fight, she wants Johnny to spend as little time as possible with the children.  She does not want her children exposed to any of his new girlfriends.  The children are already distraught at the loss of their father.”

Johnny Depp allegedly offered Vanessa Paradis $100 million to make it all go away. That is the cost of a small island in the Caribbean. Oh, wait, they already have one…

There are conflicting rumors of Johnny Depp dating his co-star, Amber Heard, who is a self-declared bisexual – Johnny got with her during the filming of the tedious film The Rum Diaries.  Since Johnny has been hot and heavy with Amber, Vanessa Paradis has been heartbroken and out in the cold – and now she has turned bitter.

Vanessa, it is usually not wise to imply to Lilly Rose and Jack that their father’s new girlfriends are walking Centers for Disease Control. They don’t infect people with Ebola. They merely copulate.

We’re wondering whether this whole custody battle will be more “300” than “Full Metal Jacket” and where the kids will end up in all of this. A divorce is difficult for an entire family, especially the innocent children, so we’re truly hoping that this whole custody battle results in an amicable split.  Fat chance of that happening – you know, a woman scorned and all that.  Vanessa is already trying to use her kids to hurt Johnny.

Let us know in the comments below who you think is to blame for the divorce.