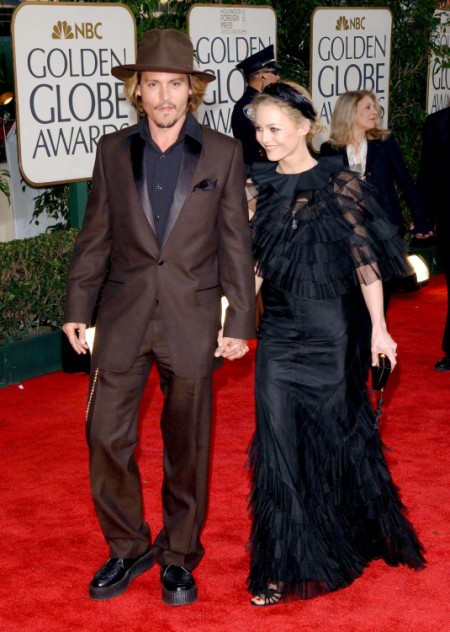 Johnny Depp and Vanessa Paradis keep showing signs that the two are rekindling their relationship even after Depp broke Vanessa’s heart last month and was seen around town with his Rum Diary co-star, Amber Heard.

First, as I already reported, Johnny vacationed with Vanessa and their children: Lily-Rose and Jack, in the south of France a few weeks back and while they were there Johnny gifted his jilted former partner of 14 years with an antique gold pendant with the inscription “My heart is always with you.”  At the time, the gift and the pendant were enough to cause people to speculate that Johnny and Vanessa were back together and trying to work their relationship out for the sake of their children.

Now I just heard Johnny and Vanessa were spied holding hands while they were together and out and about. So things must be on the up and up, right? Amber Heard was just a nasty dream? Afraid not. A source close to the pair told Us Weekly the two were just rejoicing in the fact that they could bare to stand in the same room with each other. “They were both relieved they got along well,” the source said. Local Sofia DeCout caught the two at the Plan de la Tour market on July 19 and told the magazine, “They were joking around. At one point, Johnny held Vanessa’s hand!”

Ahhh! Vanessa! Stop being so French! Don’t let him hold your hand. It will only hurt worse when he takes it away again! Apparently the source said Depp and Paradis have no plans to reconcile and Amber is still very much in the picture. See Miley Cyrus! Liam Hemsworth is safe!

Look, to each his own right? You got to let families work out their own sh-t and it seems like the Depps are trying to stay a strong unit despite the break up. I just think Johnny’s shooting Vanessa mixed messages and it’s got to be torture for her. How can you hold a man’s hand after he demolished your heart? I just couldn’t do it. Maybe I could for my kids. Who knows? I just hope Vanessa ends up with a really hot young dude who doesn’t smell like an ashtray or look like he jumped out of a Disney-themed dumpster. After all this, she’s earned it.

Do you think Johnny’s throwing Vanessa mixed messages or is this just how their relationship operates? Do you think it’s healthy for Vanessa?