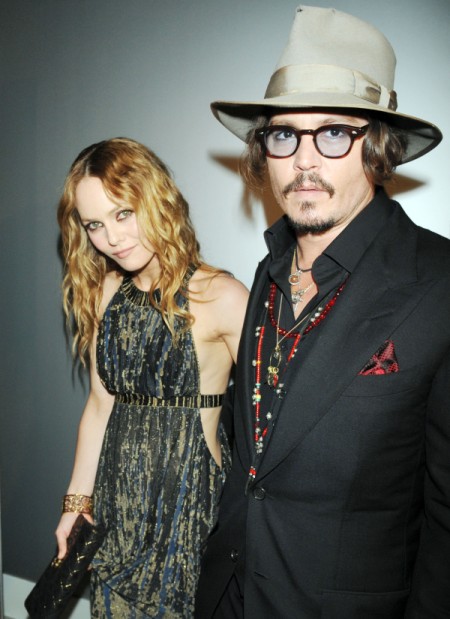 Vanessa Paradis is still terribly distraught over her break up with partner of fourteen years, Johhny Depp, but she has been determined to keep the relationship civil for the sake of their children, however, the National Enquirer reveals that Johnny’s so obsessed with his other woman, Amber Heard, he’s completely ignoring Vanessa’s demands to keep the “man-stealing, two-bit nobody” away from her son and daughter.

“Vanessa doesn’t want Amber anywhere near them,” a source told the Enquirer. “Obviously, she’s told Johnny her wishes, but rumors are flying that Johnny’s so obsessed with Amber that she gets away with murder. He’s even fired two of his assistants in the past four months for not keep­ing up with her demands. When it comes to his rela­tionship with Amber, Johnny doesn’t care who he hurts – least of all Vanessa.”

“Vanessa might be putting on a brave face in public, but she’s absolutely distraught,” revealed a pal. “There’s no amount of money that can take away her agony as the full picture of what actually went down with Amber slow­ly emerges.” Johnny, 49, and Amber, 26, reportedly became close while filming “The Rum Di­ary” in 2009. But at the time, there was more speculation about him and Angelina Jolie, his co-star in the 2010 romantic thriller “The Tourist.”

But when “The Rum Diary” promo tour kicked into high gear late last year, whispers of a Johnny-Amber affair be­gan circulating, and Vanessa exploded when he draped his arm around Amber at the film’s London premiere, sources say. “Vanessa and Johnny made a pact years ago that he would never be pho­tographed with another woman in a compromising situation, no matter how in­nocent,” explained a source. “When he did that in Lon­don, Vanessa knew there was no going back. What she can’t believe is that Amber was most likely in the picture as far back as 2009. “Right now, she’s angry and humiliated and not seeing things straight, but everyone believes her when she says she’ll never forgive Johnny for walking out on his family.”

Vanessa’s going crazy right now – understandably. I kind of figured that Johnny wouldn’t listen to the Amber demands but I also thought Amber would have the decency to stay away from Lily-Rose and Jack out of courtesy to their mother. I wouldn’t take Johnny to be so insensitive. Something’s up with him! What do you think it could be? Mid-life crisis? Existential dilemma? Why treat the mother of your children with such disregard? I’m not saying he should listen to everything she says – she’s a woman scorned and bound to make some harsh statements – but a little empathy would be nice.

Should Vanessa Paradis and Amber Heard meet and work something out away from Johnny or do you think she has good reason to want her away from her children for as long as possible?