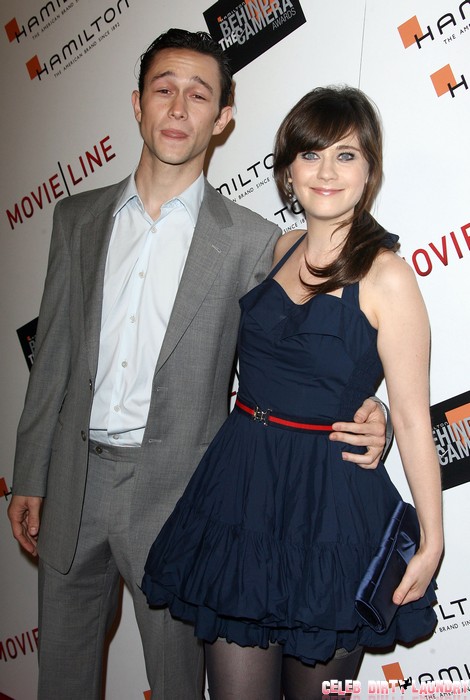 I’m not ashamed to admit I’ve had a school-girl crush on Joseph Gordon-Levitt since I was about 13 years old when I used to watch 3rd Rock From the Sun.  One of the few shows my mother let me watch and I couldn’t help but find that long haired boy adorable (As I said, only 13 or so at the time). Now JGL has grown-up and I still find him adorable, as do many others. Yes, JGL might have said a thing or two recently that got people fired up (“Pretty girls aren’t usually funny”) but my crush has not subsided although suddenly I’m thinking –‘maybe I’m not that funny after all.’ Everyone says stupid things out loud at one point or another, the difference is we aren’t in the public eye.

So now that JGL has been promoting his new movie, Premium Rush, comes all the questions I’m sure he has heard and answered before. But there is one question that JGL thinks is awkward, why don’t he and Zooey Deschenal just get together already? In the new issue of Playboy JGL answers that question in their “20 Questions” feature.

On people talking about how & Zooey Deschanel should just do it: “It’s awkward when people say that. Whatever. Zooey and I just think it’s funny. It is funny. We’ve been friends for 10 years. She loves movies, music and art, and she’s incredibly knowledgeable about that stuff. She’s turned me on to so many good movies and so much good music. It’s fun just to have conversations, watch movies with her and stuff like that.”

Did JGL just burst a lot of hearts that wanted to see a real romance between the two? Don’t get me wrong, I think being friends so for long can only help a new relationship, but why ruin what they have if they are so adamant that’s all they have. Obviously if they have been friends for this long with her getting married and divorced, then start a new relationship this summer with screenwriter Jamie Linden in between, it seems to be a clear enough statement that they are happy with their friendship? Why can’t a man and a woman coexist in this world together as friends?  I guess the answer to that is a three letter word…

My thought is, if it ain’t broke, don’t fix it.