Justin Bieber And Selena Gomez Back Together – Meet Up For Hotel Date! 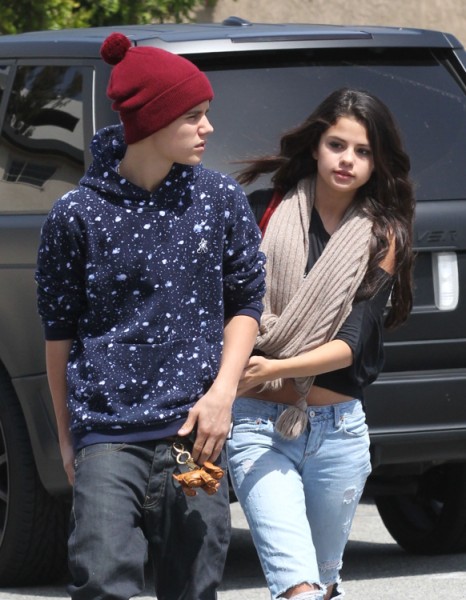 Hold your horses on the break up, Jelena might not be over just yet! Sources spotted Justin Bieber and Selena Gomez enter the same hotel in NYC at staggering times yesterday afternoon. Maybe they’re trying to work it out or maybe Selena was just giving Justin all his old crap back?

“I saw Selena go into the hotel around 5:40 p.m. and not even three hours later, Justin went in,” an eyewitness told Life & Style magazine. “I saw him leave around 11 p.m.”

Hmm… is three hours enough time to get back together? If they didn’t spend the night together then I’m willing to bet Selena stuck to her guns and did not let the Biebs charm his way back.  This is the first time the two have been spotted at the same place at the same time since October 20 since Justin’s been busy touring and groping supermodels and Selena’s been busy filming the Wizards of Wavery Place reunion and getting cozy with Jake T. Austin.

But at least this hotel date is a sign that Justin’s not ready to throw in the towel just yet. Perhaps if he stops singing break up ballads and going to musicals with supermodels, Selena will ease up on her trust issues. Or maybe not? We all knew this would happen. Why not now? Although, if I can say anything to salve some inconsolable hearts out there, note that Selena and Justin have broken up and gotten back together before. They’re young. That’s what happens. There’s no reason to believe it won’t happen again. But just remember, Selena’s BFF Taylor Swift is now newly single as well and might be encouraging Selena to stay that way with her. There Beliebers! Now you can leave poor Barbara Palvin alone. Go after Taylor Swift. I just know she’s behind this is Selena stays alone!

Do you believe the Justin Bieber and Selena Gomez back together sighting? I kinda do. Justin’s not through with this relationship yet.