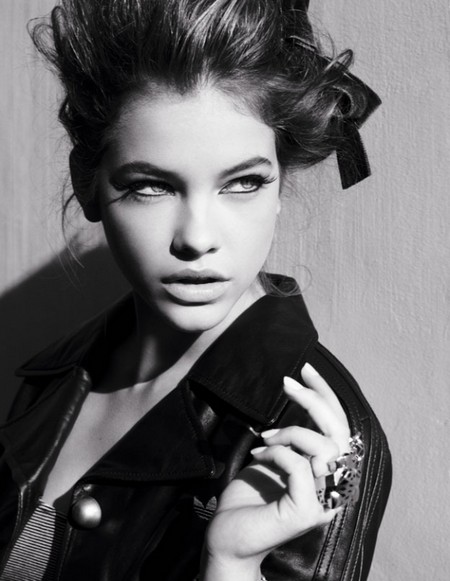 Barbara Palvin. Remember that name, because it is about to be etched into history like a nuclear war. The 19-year-old Hungarian supermodel is the one and only name linked to the recent Justin Bieber/Selena Gomez break-up. Several months ago, the supermodel took to the internet to sing a fan chosen song. During this fame whoring video web chat, Barbara sarcastically quipped, “I don’t like Selena Gomez by the way…” Whilst this quip wasn’t the catalyst, it was certainly a sign of things to come.

The fame whoring Palvin took part in the Victoria’s Secret fashion show in New York City on Wednesday. Unfortunately, for Bieber and Gomez, the spotlight wasn’t on Palvin, but on Bieber. He not only performed during the fashion show, but he also hung out backstage with Palvin. The cutesy snaps quickly went viral when Bieber and Palvin retweeted one another’s messages. Palvin also shamelessly tweeted at one point, “Okay sooo because u guys were askin for it! With @justinbieber! you were great tonight!”

A few quick thinking fans did some investigative reporting and within twenty four hours, they tweeted Palvin’s video web chat to Gomez. In turn, a fuming Gomez tweeted a picture of Justin Bieber, his friend Lil’ Twist, and – wait for it – none other than Barbara Palvin. The chilling picture sent shockwaves through the entertainment industry, as Gomez’s incriminating image spoke a thousand words. Celeb Dirty Laundry did some investigation into this and scoured Gomez’s official Twitter page, but there didn’t seem to be any evidence of this image, nor were there any tweets related to Bieber.  A visit to Barbara Palvin’s Twitter page, on the other hand, yielded some interesting results. A Twitter user named @cheesecake221 asked Palvin whether she was still with her boyfriend, to which she responded, “Yes, I am!” Palvin also tweeted on the 9th of November, “Hey everyone. Please calm down, he is all yours! Please!”

What are we supposed to believe then? Was this all a case of much ado about nothing? Was Palvin merely a scapegoat for Gomez? Could Gomez have shamelessly used Palvin as smoke and mirrors for the break-up? Was Palvin in the wrong place, at the wrong time?  Several new reports have already linked a very emotional Bieber with Palvin at a showing of The Lion King last night. There’s no official word yet on whether this was an official date, or whether Bieber used Palvin’s shoulder to cry on.