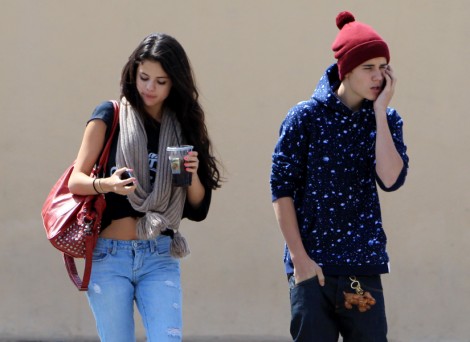 You could feel it coming. Any social media meteorologist could have told you the signs were there. But for those of you still hanging on to Sustin or Jelena please contain yourself because it’s official. Justin Bieber and Selena Gomez broke up… weeks ago in fact.

“Because of their crazy schedules, it was getting harder and harder to maintain a relationship,” the source told E! Online.

Well, that’s  horribly boring and anticlimactic for a young couple who called it quits right before the two year mark. Are you sure the break up didn’t have anything to do with Victoria’s Secret models – Barbara Palvin in particular? Justin was seen at the Lion King last night with the 19-year-old Hungarian beauty. Their… ahem, friendship, caused quite a twitter storm this week as Palvin got caught throwing herself at the young pop star at the Victoria’s Secret Fashion Show after she made some not so wise and not so nice comments about his now ex. Maybe English isn’t her first language?

But don’t cry for Selena. She’s playing this split pretty cool. She’s been busy working on her Wizards of Waverly Place reunion and has been seen cuddling up to co-star, Jake T. Austin. Two can play this game and move on at the drop of a hat, right Bieber? Let’s just sit back and grab the popcorn because the Justin Bieber and Selena Gomez break up story is not over by a long shot. Let us not forget they’ve broken up and gotten back together tons of times. That’s what teenagers do! But even if they stay broken up, it will be fun to watch. Justin isn’t the most graceful dude as evidenced this weekend by his ploy to use Palvin to make Selena jealous. He can be a spoiled, self-indulgent child at times and his favorite toy was just taken away from him. Oh, yes, sit back because Justin is going to pull a Britney Spears. He doesn’t understand that you’re not the winner even if you move on with a hot model the fastest. You’re the winner if you don’t get papped trying to beat down a paparazzo’s car with an umbrella after buzzing your head.

Do you think Justin Bieber And Selena Gomez have split for good? Did Selena Gomez dump Justin or was this a mutual break up? But if you want to take a look back at happier times, check out the gallery below. They were so cute!