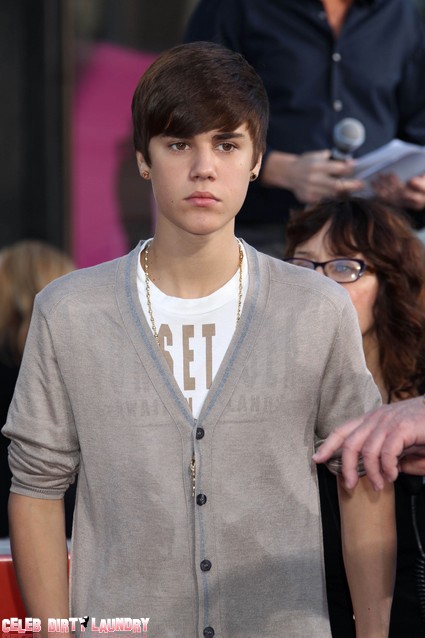 Justin Bieber lost his cool over a Valentine’s Day gift from Selena Gomez.  Selena thought that Justin would be delighted by enjoying a side-by-side nice romantic his and hers massage treat.  Justin was apparently all keen on greeting the hot sexy female masseuses but the lad totally freaked out when 2 hulking muscular MEN arrived to do the dirty work!  Many folks consider massage a normal activity but Justin was not having any of it.

Justin was so upset that he immediately put the kibosh on Selena’s gift and sent the studs packing.  No way was our man Bieber going to let any six-foot hunk get to rubbing his Selena – especially not in the nude!  The way Justin reacted you would think Selena was getting a tattoo!

Apparently Justin told the men:  “Sorry Guys – It ain’t gonna happen!”   Selena was not thrilled but what could she say?

The National Enquirer Print Edition,  March 12 reports:   Chicks can get real creative for Valentine’s Day and romantic Selena staged a surprise for her boyfriend Justin – side-by-side at-home professional massages to work out the kinks from their hectic touring schedules!

But as our solid Selena source reports: “Justin loved the idea… until the masseurs turned out to be two 6-foot-plus male hunks!  When they arrived at Selena’s Disney Doll told them where to set up – but before they could even unpack their massage tables, Justin freaked out and told them: “Sorry guys, this isn’t going to work.”

Stunned Selena didn’t get it until jealous Justin finally snapped: “There is no way a guy is gonna rub his hands all over my girlfriend’s body!  Selena quickly retorted: “Don’t be ridiculous!  He’s a professional.”

But it became swiftly clear that Justin was standing firm about not watching his gal get rubbed the wrong way.  Throwing up her hands, Selena flounced off pouting as The Bieb told the Beefcakes: Sorry guys, It ain’t gonna happen!”

But he manfully pulled out his wallet, and not only paid them for their time but added a healthy tip before showing them the door.

ALSO: Selena Gomez Upskirt On the Beach With Justin Bieber

Was Justin justified?  Would he have been wise not to show his insecurity and just endure the massage?  Or do you think,  just maybe, that Justin himself was freaking out about getting rubbed down by a dude!  Sound off in the comments below.