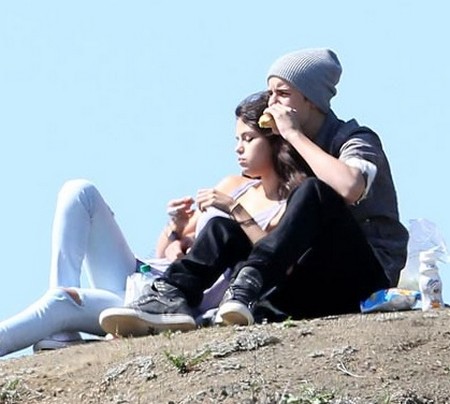 Justin Bieber and Selena Gomez were out to lunch on a private picnic. The couple must have recovered from their recent drunken spat in Florida since they were all lovey-dovey – so nice. Los Angeles seems to suit the affectionate couple well.

Subway must be someone’s sponsor since they choose it for their picnic fare is there any other reason a multimillionaire would choose it? Justin and Selena make a grand team – we just hope they stay out bars and away from the booze.

Both of Justin’s parents suffer from substance abuse issues and although his mom, Pattie Mallete, has managed to clean up her act, his dad, Jeremy Bieber has been less successful. Still, the apple doesn’t usually fall far from the tree and scientists have proven that alcoholism runs in families.

We are NOT saying that Justin has a drinking problem – but we are saying that he should learn from his parents’ mistakes and make sure her never starts down the same path. With Whitney Houston’s horrible drug-drenched death on everyone’s mind we can’t help but suggest that caution is the way to go. An ounce of prevention is worth a pound of cure – and it can save your life.

We wish Justin and Selena all the best! Will they be together forever? What do you think? Let us know in the comments below.